A Morning at the Police Station…

A Morning at the Police Station…

I truly wonder how anyone can muster the motivation to work in an environment like the one in which I’ve spent pretty much all morning. Specifically, I’ve been in the “office” of the police station’s search brigade, where I had to file a complaint denouncing the theft of 77 of the protective fences around the 1,000 trees that FAR has planted this year.

We are in the middle of the rainy season, which usually begins timidly at the end of May, reaches its peak in July and August, and ends with some sporadic rainfall in September.

It is time to plant the new trees, which – like last year – total 1,000, thanks to a donation from FAR Sponsoring Company “Soluciones Reunidas.” 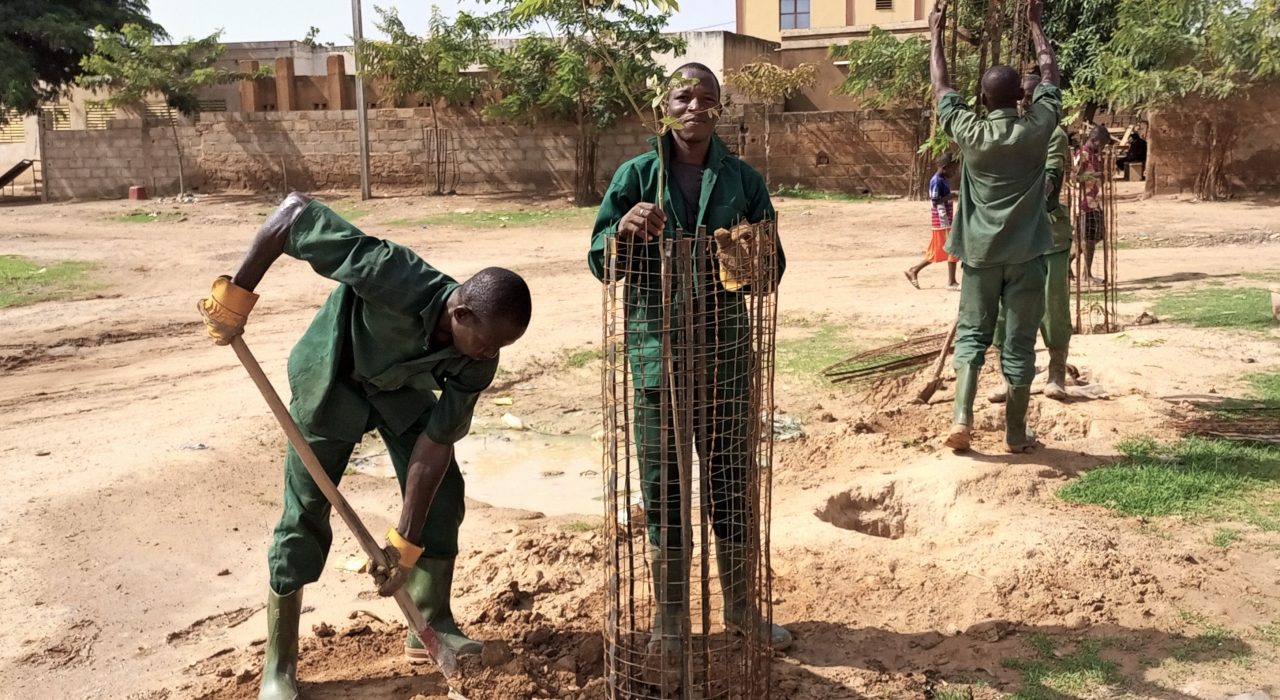 Planting of 1,000 trees by 2022, with their corresponding protection

This year, everything had been going along fine, with only the usual difficulties that we’ve learned from experience to get around, just like the last 14 years we have spent repopulating the neighborhood tree cover – leading to almost 9,000 trees that provide some 45,000 linear meters of shade to the Rimkieta landscape.

The yearly planting of trees is meticulously planned and organized: location, type of tree, space between each tree planted, depth of the hole, fertilizer, awareness campaigns to involve the neighbors in the care of the trees and – no less important around here – of their protective fencing.

These protections are necessary so that the animals, who roam free in Rimkieta, as well as in the heart of the capital, do not peel away the bark and kill the trees, in search of food.

For this reason, each tree is planted inside a 1.5-meter-high protective fence of interwoven iron. At a unit cost of 3.40€, the total value of the 77 stolen fences is more than 260 euros – a fortune here. 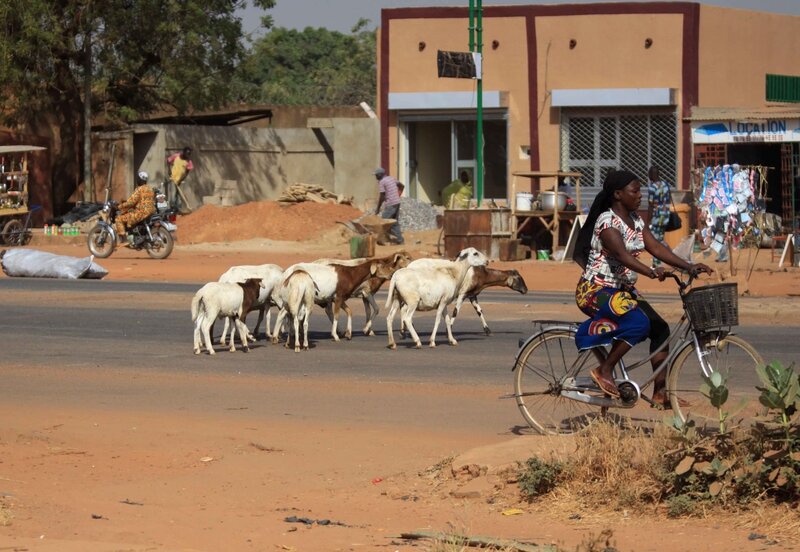 This morning I went to the police station to file the requisite complaint. Here, such cases are taken on by the “Brigade de recherche.” This search brigade is a special police unit whose main function is to investigate “small and medium offenses.”

After leaving the station, I made up my mind to visit this type of institution (in addition to hospitals) more often. Because, though perhaps I shouldn’t say so, FAR -where I spend most of my time – is an oasis in the midst of the indolence, neglect, disorder and slovenliness that prevail in these places. Thus, without meaning to, I can lose sight of the reality that the local population faces every day.

Let me explain. When you step into the police station property, the first thing you notice is the number of scrapped bikes, motorcycles, carts and other miscellaneous objects scattered around the open yard.  They are stolen objects that have been recovered, but whose owners I assume have not been located. There are also chairs and tables, presumably from some office, abandoned there when they were broken.

Big problem of plastic waste, omnipresent in every corner of all Burkina, despite the fact that there is a law that prohibits the production, import and distribution of non-biodegradable packaging since 2015. Photo: «Burkina24»

Obviously, facility maintenance is nonexistent, so both the exterior and the interior are falling apart.

With regard to the brigade itself, it occupies an office of around 12 square meters in which four “work spaces” are squeezed, each with a policeman drafting – by hand, of course – the relevant complaints. The tables are so crammed with papers that it’s hard to find a place to write. Not a single one of the chairs upon which all of us – policemen and complainants – sit is intact: one piece or another is missing from each of them. A pile of computers, screens and keyboards covered with dust and dirt are pushed into a corner on the floor. There is no privacy whatsoever between the desks, and as I wait to be attended, my heart breaks to overhear a woman reporting the disappearance of her son, a man recounting an attempted stabbing, and another woman who has been robbed of the coal she had bought “wholesale” to resell from door to door around the neighborhood. 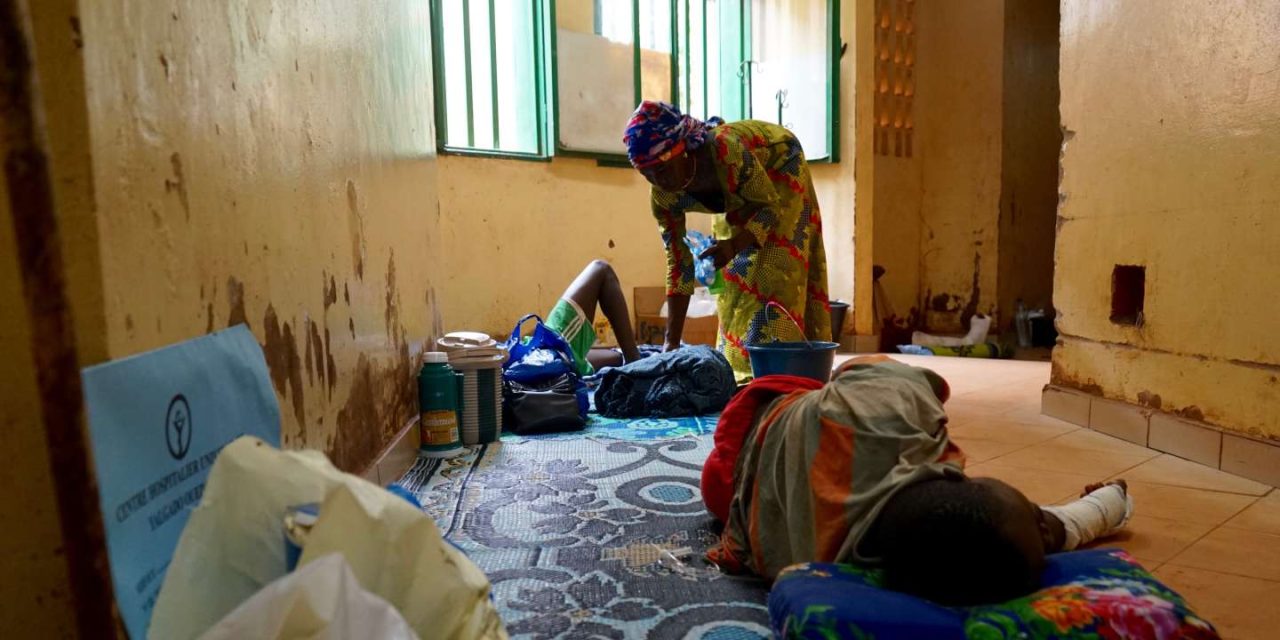 At one point, a police officer in the middle of handling a complaint notices a black bag in a corner of his table. He opens it, pulls two filthy machetes from it and asks his coworkers if they know where they came from. When I leave the office hours later, they still have not related the machetes to any case.

There are four of us inside lodging complaints, around 20 people in a cramped “antechamber” to the office, and more than 40 waiting outside. Although it is not a sunny day, it is cloudy and threatens rain, making for significant humidity in the air that makes the day feel very hot.

Although I’ve received generally excellent treatment (perhaps because I’m “nasaara,” which is how white people are called in Mooré, the language of the majority ethnic group) I have to wonder how anyone can muster the motivation to work in such an environment. Especially given that their wages are low and that they have to go out to “patrol” for their investigations using their own motorcycles, usually paying for gasoline out of their own pockets.

How is it possible that, with all the aid that the country has received over so many years, we are still at this level? This is a police station, but the same panorama can be found in any other public service, especially in hospitals, where this neglect and general apathy has much more serious consequences…

I may be oversimplifying, but I think that the reason for this generalized apathy must be a scale of priorities that I am not able to understand. And perhaps also a widespread societal belief that what is “public” belongs to no one instead of to everyone.

What is certain is that we at FAR continue to do what we do, warming up the engines for the “rentrée” 2022-2023, with very clear priorities: an eminently social mission, which we carry out with fundamental business principles such as rigor, austerity and anticipation, focused on serving more than 3,600 direct and 12,000 indirect beneficiaries.