A Year without You, Our Dear Uncle Pepe

A Year without You, Our Dear Uncle Pepe

Burial a few days ago of the 57 soldiers killed in a terrorist attack in Inata (northwest, border with Mali)

We are entering the final stretch of the year 2021, which has been anything but easy. The global COVID-19 crisis, again intensified by a new variant apparently resistant to available vaccines, and the expected downturn in global stock markets have been bad enough. This difficult background has been worsened by substantial insecurity in Burkina due to terrorism that has been “in crescendo” throughout the year. In the last six years, terrorism has been responsible for thousands of civilian and military deaths, and has displaced almost 1,500,000 people (7% of the population). Still, Uncle Pepe’s care from “Up There” has been unflagging during this first year without him here with us.

It cannot be a coincidence that our beloved Amdiatou (may she rest in peace) was returned to happiness for her last days by such a smoothly run operation performed in Burkina by doctors from Barcelona’s Sant Joan de Déu hospital.  Neither can the gift of Providence that took her without suffering, for a “simple” case of malari. (Post: https://www.amigosderimkieta.org/en/three-and-a-half-very-rewarding-weeks/) 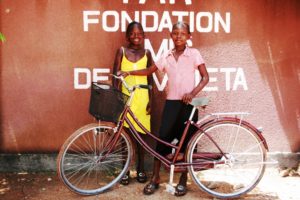 Nor that some great Friends of Rimkieta have decided to lighten the long waiting list for the more than 2,000 women requesting a bicycle: We are currently organizing the delivery of 500 extra bikes for this Christmas, reaching this year more than 16,000 bikes distributed.

Nor that other great Friends have bet on the enormous benefits – anywhere on the planet, but especially in this arid land of Rimkieta – of tree planting. Thanks to their help, we have been able to double the number of trees planted this year, exceeding 10,000 trees planted in total.

Not to mention how well all the pieces came together to expand from 300 to 450 the number of children who can benefit from the Maternelle! Uncle Pepe fought tirelessly for years to reach this goal, and at the beginning of this year, it was finally carried out, impeccably, again thanks to other great Friends of Rimkieta! The new educational, kitchen and cleaning staff, the new child beneficiaries and the filming of the facilities, have been brought to fruition in total harmony with everything that has already been functioning since the Maternelle opened its doors in 2008. 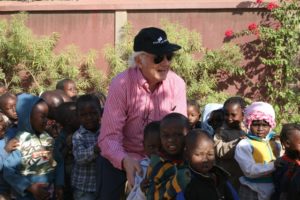 For all of this, and for so many things that you contributed in your 16 years as FAR’s president, we are so very thankful.  The “street children” and “education through sports training” boys (who we all know were your favorites) – and all the rest of the beneficiaries: mothers; employees; management; trustees, sponsors, patrons and friends, offer you a simple sports tribute, in your memory and honor.

Thank you so much for everything, dear Uncle Pepe, and please keep looking after us all from up there!