When I say that Burkina drains my energy every day but returns it twofold, it’s because of cases like Aline’s – which I shared with you last month – one of the most painful experiences I’ve been through.  But thank God there are also cases like Aldelphe’s – in which after suffering third degree burns on both legs, today she can walk again! 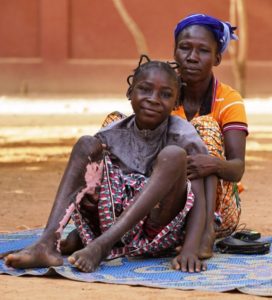 Adelphe, before the operation, with her mom

Adelphe is the eldest of three children whose father died of a courte maladie (short illness) – which is the “diagnosis” they give here when no one knows why someone died all of a sudden… They live in Zongo, the un-zoned neighborhood that abuts Rimkieta, in a one-room adobe house without water or electricity.  The mother works cleaning houses and knitting.  As usually happens in these cases, when the father died, her in-laws cut off all ties with her, and her own family lives far away, and so she can’t count on them. What we know about Adelphe is that when she was 8, she fainted, remained in a coma for a few days, and awoke with brain damage and epilepsy.  Two years later, Adelphe, who spent her time begging on the streets, was one of those selected for the educating unschooled girls project.  After a two-week trial period, we were convinced that she was highly unable to concentrate or pay attention or sit still for more than two minutes straight.  She was uneasy and couldn’t adapt to the classroom.  We decided to put her in the Health assistance project in order to try to get her a more specific diagnosis of her lesions, find out what she was capable of, and look for a project that fit her needs. 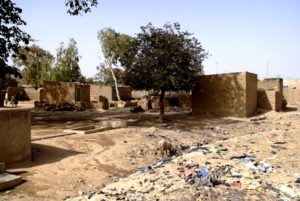 Only a few days after her first doctor’s appointment in Fitima – one of the country’s only re-education centers – Adelphe burned both her legs in a domestic accident, falling into a stewpot. She was hospitalized for two weeks, but before she was finished healing, she was released and sent to another hospital because of insuffucu3ent medical personnel (we were unable to confirm these, the mother’s assertions).  Her mother, without letting us know, took Adelphe to her village, where they continued to heal her according to tradition…. When they felt she was “cured,” a month in which we had no news of Adelphe or her mother, the two returned to Zongo and came to see us at FAR, where we saw the consequences of not having finished the healing process in the hospital or done any rehabilitation:  both legs were stiff and retracted, so she was unable to walk and had to move by dragging herself across the floor.

After a year fighting with the public hospital to get them to program an operation to give Adelphe skin grafts to try to enable her to walk again, the door to the wonderful community of Cuban doctors living in Burkina was opened to us. We met Ciro Estrada, a great doctor and even better person.  He is a surgeon who specializes in burn reconstruction, but he had only a few weeks left of service3 in Burkina.  Before he left, he took very special care of Adelphe’s case and assured her she would walk again with the grafts and proper rehabilitation.  Before going, he promised to inform his substitute, who would take over the case as soon as he was installed in Burkina. And that’s what happened!  Dr. Márquez, specialist in plastic surgery and reconstruction – infinitely professional and big-hearted- did the first graft operation on her right leg in April 2017, followed by another on the right leg in September of the same year. After more than 18 months of rehabilitation, led by doctors Diallo and Javier – who’ve been like guardian angels to her – Adelphe walked again! 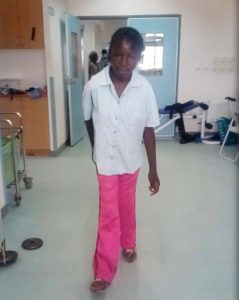 She only has a few more rehabilitation sessions to perfect her walking posture and we’ll pick up where we left off before she got burned more than three years ago, trying to find a future for Adelphe beyond begging. Our heartfelt thanks to Doctors Estrada, Márquez, Dialo and Javier and all the administrative and medical personnel at the Blaise Compaore Hospital for their professionalism, attention and care.  And thanks, too to those who made possible all the expenditure that this special case has required and will continue to require. Full of energy, María