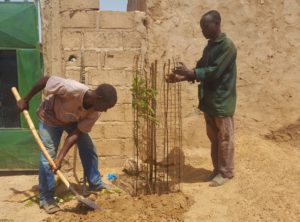 Lambert and Jean Marie, in charge of the plantations and supervision of the trees.

The start of the rainy season, around May or June, marks the beginning of the new tree planting.  And like every year, when it’s over, Jacques – the project leader – reports on how it went. I love how he recounts it, with the depth and seriousness with which he works, and that all of us try to apply.  I’m sharing it with you today.

As agreed, the new plantation zones were placed to the north of the Maternelle and FAR offices, where we planted 200 trees, and to the south, where we planted 400 more. The two areas selected are continuations of the 2014, 2016 and 2017 plantations. Remember that when we choose the areas, we take into account the degree to which the neighbors will participate, after we’ve made them aware of the issues.  The ease of managing watering logistics is also a factor.  This year’s new zones are marked on the FAR plantation diagram. 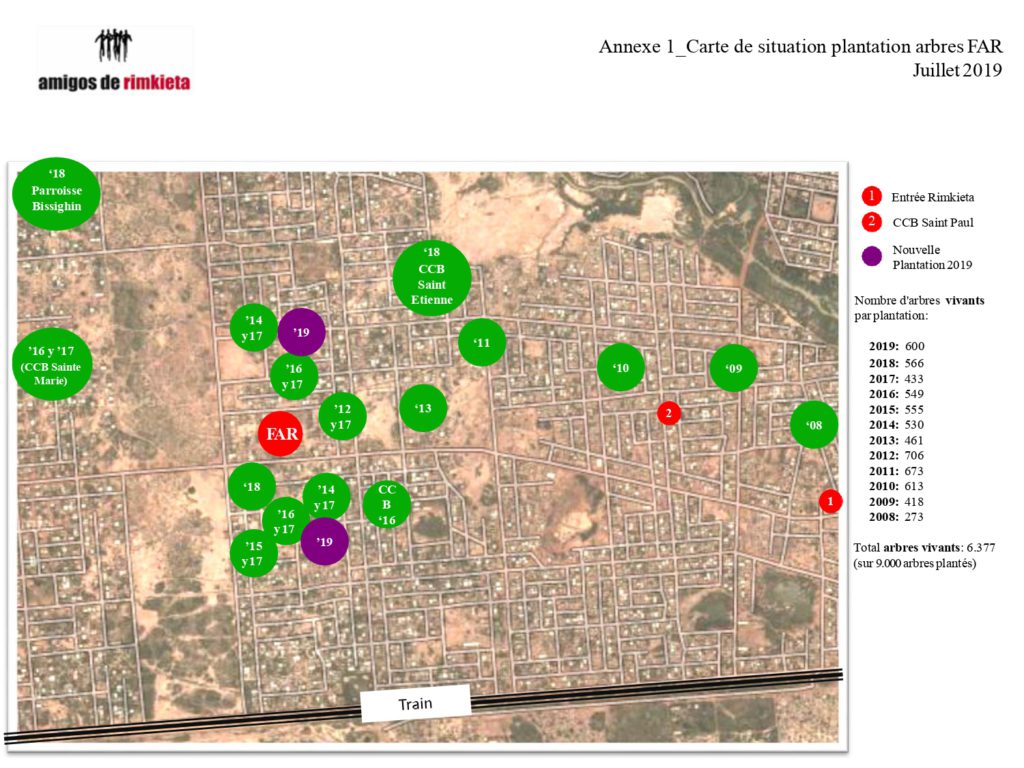 As in other years, we planted Acacia trees at least 1.5 meters tall.  It’s a leafy, resilient tree that can grow half a meter a year and that doesn’t need much watering. During the planting we took care at all times to follow the instructions we received from Mr. Kafando (digging depth, space between trees, amount of fertilizer and compost, water, placement of protective elements, etc.).  For protective covering, we used 1.5-meter-high woven metal mesh again, as it has given such good results the last 2 years we used it.

At left, a tree just planted this year. At right, one of the trees planted in 2015, providing abundant shade to families only 4 years later. 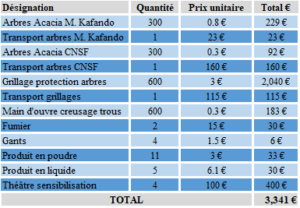 Detailed costs for the 2019 plantation.

The plantation costs were 3.340 euros, as estimated. Note that, s agreed, this year we purchased half the trees from Mr. Kafando – our usual supplier – and the other half from the CNSF (National Forest Seed Center).  As you’ll remember, despite last year’s bad experience with the CNSF because of a miscommunication between their offices and their nursery, the trees didn’t meet our minimum height requirement, we decided to give them another chance this year to test the quality of the trees and to have a second supplier.  There was no problem this year.  They met the minimum height requirement and they’ve been planted.

This year we had help again from the AAFAR (FAR Alumni Association) members, who came one morning to help Lambert and Jean Marie with the planting.  It’s worth mentioning that they worked hard with a great attitude! 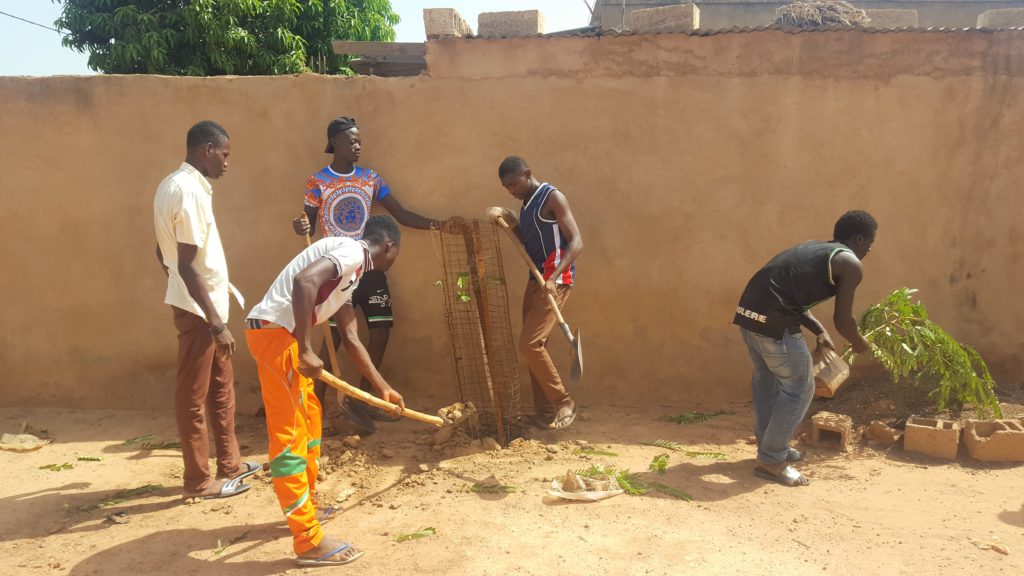 AAFAR (FAR alumni association) members. So far, it is comprised of children from the Education and reintegration of street children project who have completed their training in workshops and become apprentices. Here they are seen on the day they dedicated to working on the 2019 plantation.

For the children in FAR

This year we also repeated the awareness campaign about respect for nature and the environment for all the nursery school children and all the street kids and unschooled girls in FAR programs.  As you know, the suppliers bring in 600 trees, which we store in the Maternelle yard, planting some each day.  The children are entrusted with watering the trees every day before they are planted. 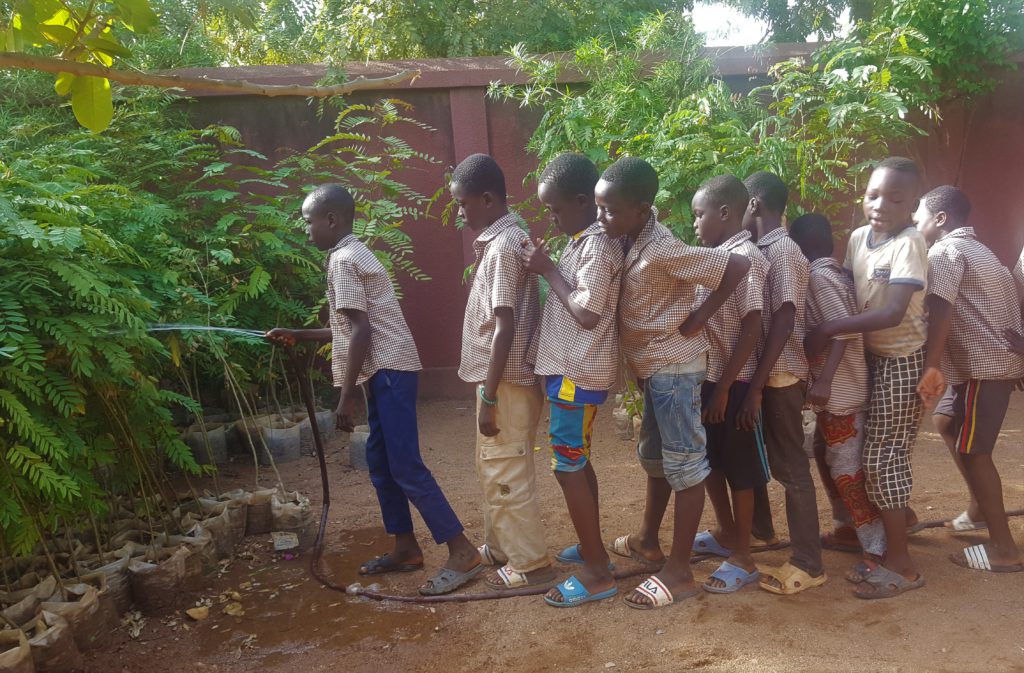 Children from the 11th graduating class of FAR’s street kids project help water the trees that have yet to be planted each morning.

For the neighborhood residents

Similarly, like every year, Lambert and Jean Marie kept working on awareness among the residents of the plantation zones so that they cooperate directly in keeping the trees alive – caring for them by keeping animals from eating them and children from playing with them, and watering them.

As scheduled, we held awareness campaigns in different areas of the planted zones, performing a theater piece created for the purpose of sensitizing the public.  The piece, in a jovial tone that’s typical in local awareness campaigns to get the message across, depicts several scenes of deforestation, the benefits of trees and the importance of caring for them, the need to protect them from animals and children, watering, and so on.  After each performance, there was discussion, in which many residents participated, especially the children.  The cast did a great job with the show and delivered the message very well.

We hope that the rainy season will be a good one, so that the trees’ first month will be as wet as possible without going overboard (unfortunately, we’ve lost more than one tree to excessive water).  We’re counting on Lambert and Jean Marie’s daily oversight for the plantation’s success.

Thanks so much, Jacques