Another 150 Children in the “Valencia” Maternelle!

Another 150 Children in the “Valencia” Maternelle! 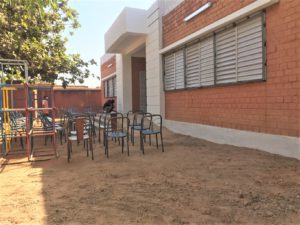 Main facade of the new building

I can think of many ways to begin 2021. A little bit of “Philomena” in Burkina would no doubt be one of them. Yet, the best of all is the blessing of three new classrooms in the “Valencia” nursery school, which allow us to serve more children, increasing our capacity from 300 to 450.

The expansion is fruit of FAR’s president’s the steadfast commitment, shared by our dear “Uncle Pepe,” may he rest in peace. For years, one of our main objectives was to build a second maternelle to increase the number of children and families served. Countless difficulties got in our way.  I must confess that I threw in the towel at one point… However, nothing can discourage “those two,” who came up with the idea of extending the existing maternelle rather than building a second one.

The idea involved a sort of game of “tetris.” This entailed relocating to the Educational, Professional and Sports Reintegration Center the guard’s family’s house, the warehouse, and the employees’ bike and motorbike parking area.  Those moves allowed us to build the three new classrooms in which to serve 150 new children from the neediest families in Rimkieta and Zongo. They will benefit not only from pre-school education in accordance with the Ministry of Social Action, but also, and most importantly, from a comprehensive nutritional program (milk, cocoa, cereal, rice, eggs, fruit, and bread), growth monitoring, and vitamin, mineral and antiparasitic supplementation. 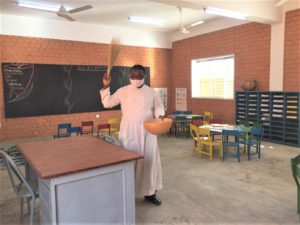 Blessing of one of the 3 new classrooms

Many people ask us why we work so hard in preschool education and don’t build a school. The reason is because early childhood is the period most vulnerable to illness, and in which a proper diet is indispensable for the full development of children’s brains. These two elements – health and nutrition – coupled with an ideal environment for their early schooling, are the foundations of the comprehensive growth necessary to make them the future women and men who will lead our dear Burkina with integrity, sacrifice, generosity and service and love towards others.

The very emotional ceremony was simple, constrained by the COVID-18 prevention measures that we practice here as well. The staff, the Saama Naaba (representing the Zongo Naaba, Rimkieta’s higest traditional authority), the architect, the builder, the construction manager, and Misters Fulgence, Bellemou and  Konseibo (our beloved local Advisory Council since we arrived in Burkina more than 16 years ago) attended. Father Joseph blessed the classrooms and the expansion of the kitchen, which was also necessary to meet the needs of the new children. 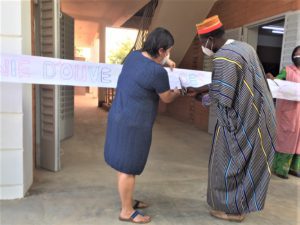 Ribbon cutting by the Saama Naaba, representing the Zongo Naaba

On Monday, January 11, in the morning, the wails of 150 new children bring the Valencia Maternelle to life again. The “regulars” regard them with an expression that is a mixture of compassion – as they have been there and know what it feels like – and hope, as they also remember that crying will give way to laughter within a few days. The new teachers, who had a month of operational training before opening day, strive to implement what they learned. Rihanata and Mme. Hema, the maternelle’s principal and deputy director, oversee the first day of school with 450 children.

All in all, what better way to start the year? I’m thankful from the bottom of my heart to all those who have contributed, especially to the “la Caixa” Foundation, the expansion’s principal sponsor, as well as to everyone who was involved in the construction.

Wend na niingi and fa barka! (“God bless you” in  Mooré, the language of the  Mossi, Burkina’s largest ethnic group). 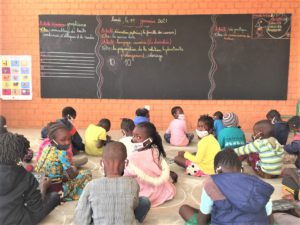 First day of class in one of the new classrooms