Back to Square One (10th Coup d’État in Burkina)

Back to Square One (10th Coup d’État in Burkina) 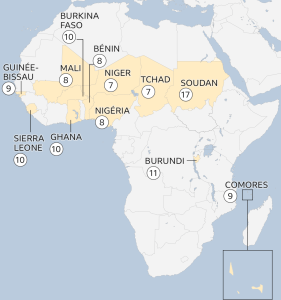 African countries with the highest number of coups since 1952. Source: Jonathan Powell BBC

I have always been fonder of Parcheesi than of ‘The Goose’ (the popular Spanish board game ‘La Oca’). Yet, while both games could serve as a simile for Burkina’s current situation after its 10th coup d’état this weekend, I’d relate it to the experience of landing on square 58 (the skull) in ‘La Oca’, which sends you all the way back to square one.

Just over eight months ago, Burkina Faso suffered its 9th coup d’état, after which Lieutenant Colonel Damiba put an end to the 6-year government of Roch Marc Christian Kaboré, whose predecessor, Michel Kafandó, led a year of transitional government – a failed coup d’état included – after the expulsion of Blaise Compaoré after 27 years in power.

In his first speech, Lieutenant Colonel Damiba defended the coup d’état on the basis that the gravity of the situation of violent terrorist extremism in which we found ourselves – and Kaboré’s inability to do anything about it – forced the army to take command. The fight against terrorism had been at the top of his 2-year transitional government’s “road map”. He gave a speech that touched hearts at all social strata, naming them one by one and promising to end all of their problems. We were all dazzled at first, and we celebrated the coup d’état in the conviction that a new era was dawning for this wonderful country.

But during this last month, the deterioration of the security situation – what the new interim president, Captain Traoré, has described as (Lieutenant Colonel Damiba’s) “noncompliance with the commitment made in the January coup to contain the Islamist insurgency” has led to the new coup. This was carried out by the military itself in what some have called an “internal settling of scores,” reflecting deep divisions within the army. 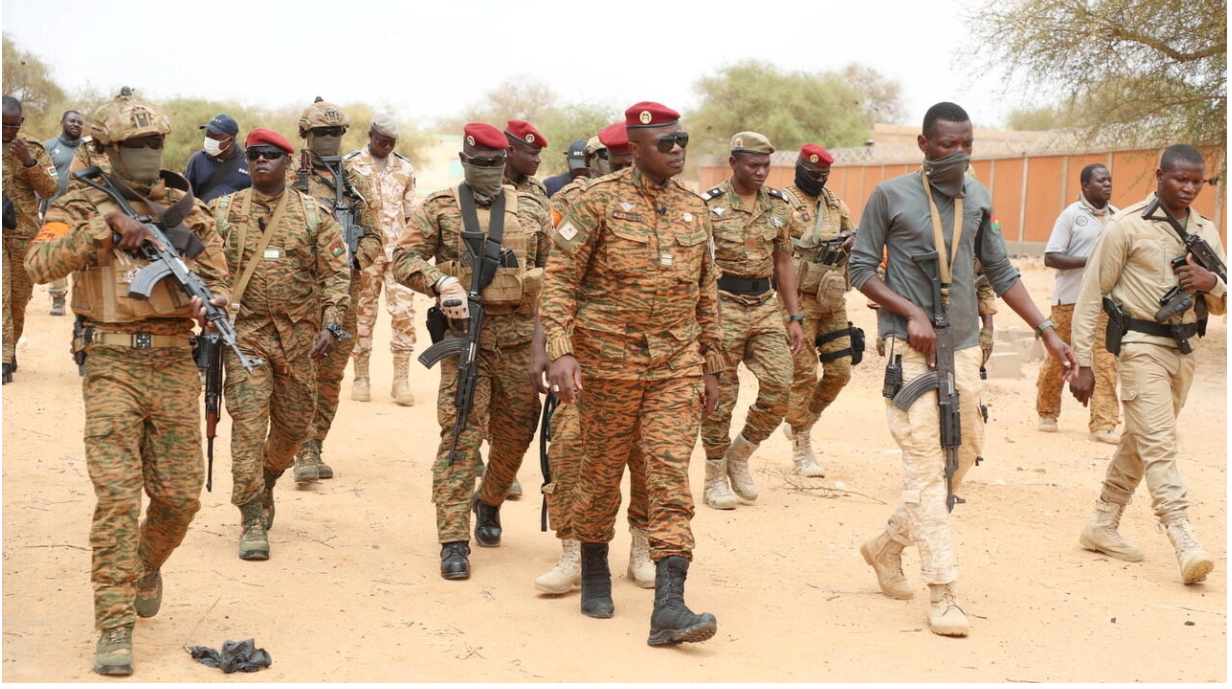 Lieutenant-Colonel Damiba, former President of the transition, surrounded by his men. Photo: blog centrafrique press over

Among the most recent incidents that have aggravated the already deteriorating climate within the army, which may help to understand both “justifying” accusations of this coup d’état are:

2. The harshness of the latest terrorist attacks. Specifically, the September 26 ambush on a convoy carrying supplies to Djibo. Djibo is an area of the Sahel that has been a constant target of attacks since 2015, left entirely “in God’s hands,” and where, unfortunately, we received news yesterday that six children had died from famine. The government admitted that this attack had been carried out by “terrorist infiltrators” in the convoy…. The attack left an initial official toll of 11 soldiers killed and more than 50 civilians missing, and another “unofficial” tally of about 30 soldiers and a hundred civilians killed. The mismatch in the number of recognized victims generated enormous anger among the population. See the video of the attack by clicking here 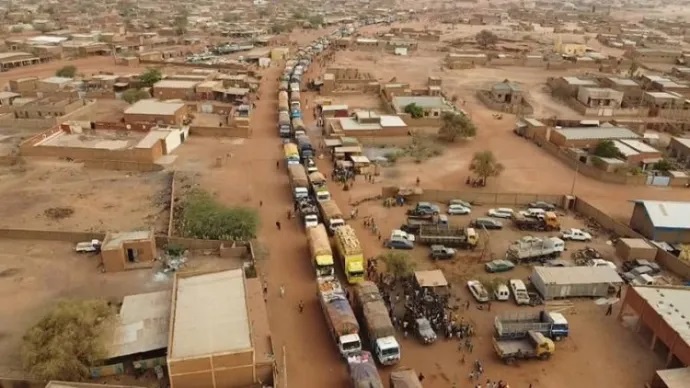 3. The attack coincided with Lieutenant Colonel Damiba’s presence at the United Nations General Assembly in New York. His performance there was highly criticized for his “neutral” speech, for the duration of his stay (5 days) and for the size of the committee that accompanied him (more than 50 people).

This was made worse by the fact that his counterpart from Mali did not attend the meeting, sending on his behalf, on a lightning trip back and forth, the Prime Minister, Colonel Maïga.  Maïga, in his speech, attacked France, MIUSMA (the Human Rights Division of the UN mission in Mali), the UN and ECOWAS (Economic Community of West African States), as well as extolling the successes of his government against the jihadists and the recovered sovereignty of his country. 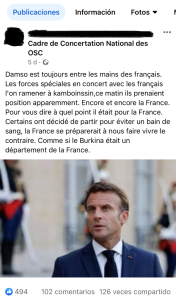 The role that Mali plays in the current situation in Burkina Faso bears explanation. Following a coup in May 2021, Colonel Assimi Goïta seized power and undertook an “anti-French” battle in his country, with the withdrawal of the French anti-terrorist special forces “Barkhane and Takuba” and the prohibition of broadcasting by the French media RFI and France 24h, among other actions. French military support was replaced by the Russians, with the presence of the controversial Wagner paramilitary group.

In Burkina, unlike the January coup, this latest coup has been more complex, for several reasons:

1. Both the coup’s leader and “the overthrown” are from the military. We have spent three days of great uncertainty due to the confrontation between the “pro Lieutenant Colonel Damiba” and the “pro Captain Traoré” camps. In the end, once again, it has been necessary for the traditional and religious chiefs to intervene in the mediation, thanks to which Lieutenant Colonel Damiba presented his resignation, but not before fleeing to Togo.

3. Added to this were three interventions (one on television and two on radio) by Captain Traoré in which he added more fuel to the fire of “anti-French politics,” hinting that he has other supporters (without naming them, but most likely meaning Russia). This leads us to think that perhaps Russia is behind this coup d’état to supplant France, having already done so in Mali and the Central African Republic. The head of the Wagner group has already expressed his support for Captain Traoré and congratulated him on the feat. A word to the wise is sufficient…

4. All this has led to a growth in a preexisting “anti-French politics” sentiment, among the population. Over these last days, groups from this sector – waving Russian flags – have attacked French institutions in Ouaga (the embassy, the French institute, the offices of Bolloré and Air France, the Total gas stations, etc.), asking for collaboration with the Russians in the fight against terrorism and the rupture of the agreements with the former French colonial power. This popular movement in the street has been the key to the balance of power shifting towards Captain Traoré.

At this writing (Wednesday, October 5, six days after the start of the coup d’état), the situation seems to be gradually returning to normal, although I am quite afraid that the “anti-French politics/ pro Russian” movement is going to continue to cause disruption.

The new interim president during the transition (2 years ago he initially agreed to call elections), Captain Traore, 34, says “he is close to his men, willful and courageous.” Some have come to compare him to the famous Burkinabé revolutionary president Thomas Sankara – the “African Che Guevara.” 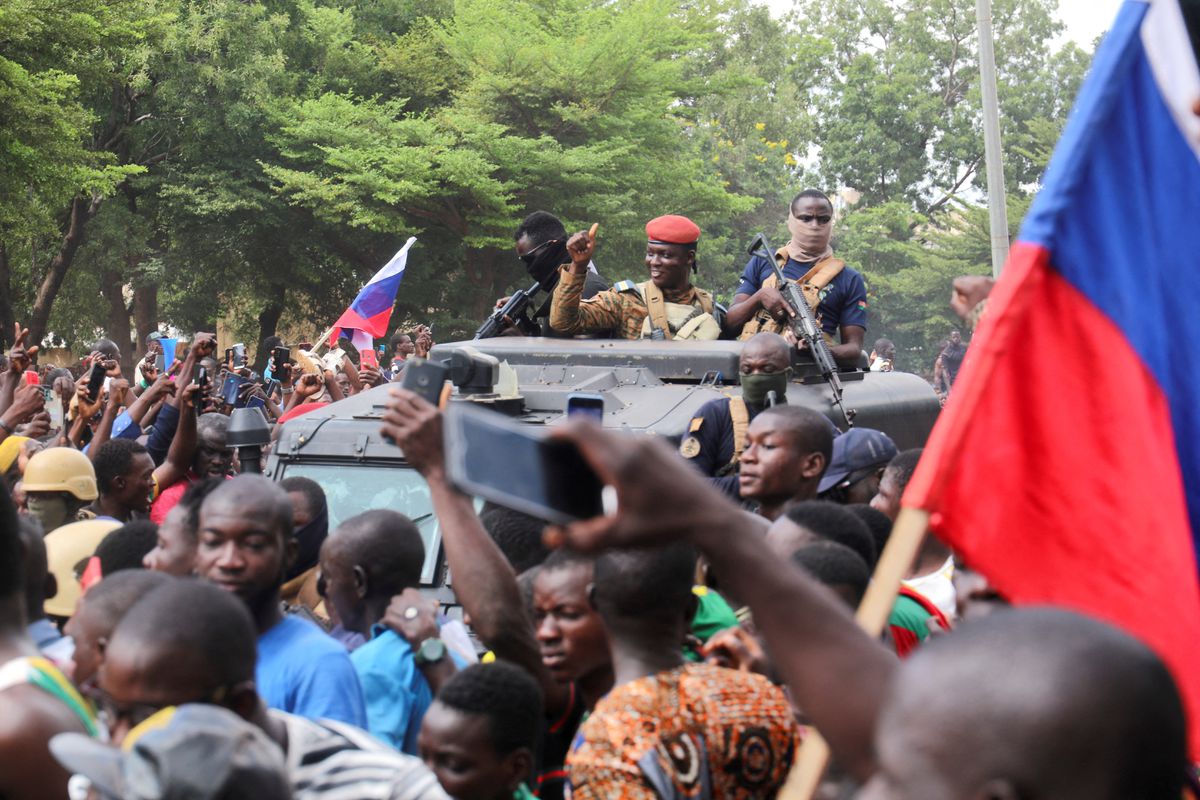 Captain Ibrahim Traoré upon his arrival at Radio Televisión Nacional to announce the change of Government. Photo: Vincent Bado/REUTERS

In this context of cautious expectation, I’m aware that it is still too early to dare to analyze his character. Furthermore, despite being upset by Captain Traoré’s interventions during the coup d’état, in which he added fuel to the fire of “anti-French politics” sentiment, and his sometimes association with Wagner, I must confess that I liked very much his first meeting with the General Secretaries of the Ministries (the interim managers once appointed by Lieutenant Colonel Damiba).

He first apologized for the coup: “… we didn’t want what happened, but we had no choice…“ 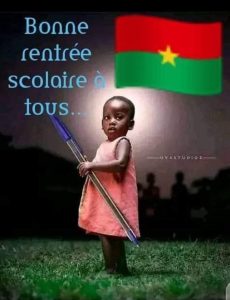 He then began to exhort everyone to get down to work: “… in the next 3 months we have to do what we should have done for the last eight months… Everything is urgent. We need a quick rhythm, moving fast and abandoning red tape. There are ministries accomplished in the art of receiving files and leaving them on the table… Identify these people and act… it is not normal that after a day of work the same files remain on the table unattended…”

So here we are, back to “normality” after the 10th coup d’état in Burkina.  I say “normality” despite being aware that unfortunately it is also a return to square one of the road advanced following January’s coup d’état in terms of recovering the confidence of much-needed external counterparts, and of its economic and social consequences.

That said, at FAR we are more motivated than ever to continue doing what we do best. We kicked off the new 2022-2023 academic year – which began on Monday after the coup d’état as if nothing had happened – for the more than 1,100 children and adolescents who are direct beneficiaries of the Maternelle, the street children, the unschooled girls, the school and university scholarship recipients, and the sports training group.