Entrance of one of the military camps object of the mutiny

4 a.m. on Sunday, January 23 of the recently debuted year 2022. My sleep is disturbed by what I initially identify as drilling coming from construction on a neighbor’s house. Once fully startled from the REM phase, and after a few seconds sharpening my hearing, I clearly recognize – having heard it before on several occasions – the sound of the bursts of gunfire that set off a military mutiny that has become the 8th coup d’état in the 61 years of Burkina Faso’s “independence”.

The mutiny took place simultaneously on several military camps, one of which is about three kilometers from home. The house’s single ground floor construction amplified the sound, which resonated in waves as if the military had mutinied in our own backyard.

Confined to our home of our own volition, in pure COVID style, and with complete serenity (which I understand might seem surprising to anyone who hasn’t lived through several similar events here without major complications), we spent Sunday morning with the intermittent background music of the “papapapapapapa“, with dozens of rumors but no confirmation of what was happening. Just before 4:00 pm, the magic of this country took shape again. When – literally – the sound of gunfire gave way to the sound of “vuvuzelas” announcing the knockout match the Étalons (the Burkinabé national team) were to play in the CAN (African Cup of Nations 2022), it was confirmed once again that Burkina is fascinating and that it has something special. 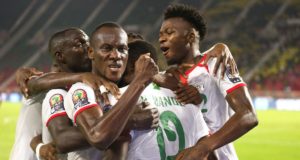 A Twitter post from the President (who had shown no signs of life since the mutiny began) cheering on the national team brought to life a city that had been “dead” since dawn. After a three-hour respite while the match lasted – resulting in a hard-won victory for the Etalons (whose winning penalty shot was kicked by a participant in our beloved FAR’s sports training project), the bursts of gunfire returned. We went to sleep with their background noise, still without any official statement on the country’s situation. There was, however, a new Tweet from the President congratulating the national team for the victory, and two communiqués that established an 8:00 pm to 5:30 am curfew and the closure of schools for Monday the 24th and Tuesday the 25th.

This Monday was another story. Without any background “music” beyond what each person chose to play, peppered by the whatsapp and email messages of support and affection from many of you who will be reading this post (for which I take the opportunity to thank you again), the confusion of what was happening rose steadily since early morning. Most national and international media having confirmed a coup d’état, the day was marked by a high degree of bewilderment due to the lack of an official statement and new rumors that did not bode well… 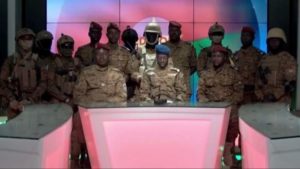 Finally, just before 6 pm, a new solitary burst of gunfire announced the official statement by which the MPSR – the Mouvement Patriotique pour la Sauvegarde et la Restauration (Patriotic Movement for Safeguarding and Restoration) – led by Lieutenant-Colonel Paul-Henri Sandaogo Damiba, claimed to have ended the mandate of President Roch Marc Christian Kaboré, suspended the Constitution, dissolved the Government and the National Assembly, closed borders and imposed a new curfew from 9pm to 5am. 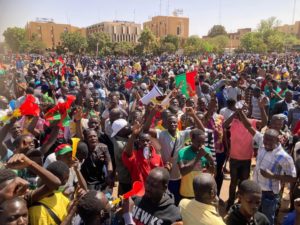 Demonstrations of joy and support for the MPSR this morning

As January 24 coincided with the feast of Our Lady of Peace, I went to bed convinced that everything is for the good and certain of beginning a new stage for this wonderful country of men and women (especially women), with a fascinating capacity for resilience and an exemplary strength and desire to move forward.

God bless Burkina Faso, the country of people of integrity!