Chronicle of a Coup d’État

After nine months in Spain and only a few hours after getting home, my adoptive country welcomed me with a coup d’état that paralyzed for a few weeks the exemplary transition process that Burkina was enjoying.

The incident, a real and exemplary popular revolt that happened less than a year ago, which I’m sure you’ll recall (https://www.amigosderimkieta.org/en/blog/six-days-to-political-and-social-change-in-burkina.html), meant the end of Blaise Compaore’s “reign.” I had been advised it was coming and was prepared, as much as it’s possible to be prepared for something like that. This, however, took me completely by surprise, newly arrived and bearing the weight of responsibility for a 2-month-old baby boy. What a difference!

The truth is that Maïtre Fulgence, our lawyer in Ouagadougou, had warned us. The only thing that could imperil the electoral process was if the Election Committee invalidated the presidential candidacy of some ex-members of Compaore’s government who had supported amending the Constitution in order to allow him to run again.

The RSP controlling the streets of Ouagadougou. Photo: Joe Penny/Reuters

And indeed, because of this invalidation, the Presidential Security Force (RSP), led by Compaore’s right-hand man General Dienderé, interrupted the meeting of government ministers last September 16, sequestering the entire transition government, including its president, Kafando, and Prime Minister Zida. Pow!! In one fell swoop, as if swatting a fly, an entire country’s future was cut short. The news provoked hours of deep sadness, uncertainty and uneasiness, not to mention the background “music” of the shots the RSP fired into the air to show their power and make clear they were armed… We had to go to sleep like that.

It’s hard to summarize everything that happened over those days. They were intense days, thick with rumors and even moments, I won’t deny it, when I was a bit afraid. 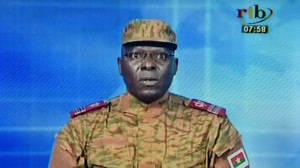 Thursday the 17 we awoke to the same sound we went to bed with: bursts of gunfire as the RSP fired into the air, only now in order to disperse any attempt at demonstration by the citizenry. First thing in the morning, a RSP militant, in the name of the newly founded “National Democracy Council” (yes, “democracy”…), made a declaration condemning the transition government’s bad management, announcing that they had assumed power in the country and dismissed the transition president and dissolved its government, and declaring their desire to “set up a unifying government that would exclude no one from the next elections.” 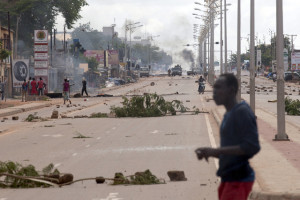 Barricades on the streets against the coup d’état

And there you have it, the outrage of the coup d’état. In a second communiqué, General Dienderé proclaimed himself President, announced the closing of airspace and borders, and established a curfew between 7 pm and 6 am. People began to mobilize, taking to the streets to protest and put up barricades all over the place to block the RSP’s movement. The shots “into the air” didn’t let up all day and we went to bed with an official, so as not to say unofficial, count of 3 dead and 60 wounded by stray bullets, and an urgent plea for blood donation at the country’s main hospital, Yalgado. Unfortunately that wouldn’t be possible because, in addition to the curfew’s hours, our embassy’s mandate was clear: to remain in our homes all day until further notice. I am grateful to the embassy for the attention we received during those days.

Friday the 18th was a day packed with rumors, all of them quite alarming. Dienderé announced the freeing of Transition President Kafando, which in reality was a transfer to his residence, under house arrest. There was no further news of Prime Minister Zida: He remained sequestered and many rumors were concerned with what fate might have befallen him. More dead and wounded, all the streets cut off and barricaded, tires burning, and the first news of total chaos to “practice looting.” In mid-afternoon, Macky Sall, President of Senegal and CEDEAO (Economic Community of Western African States) representative, arrived in Burkina along with Benin’s President Boni Yayi as crisis mediators. All day long, international bodies had been condemning the coup d’état and many countries had announced the cancellation of aid to the country. We went to bed with no news about the negotiations. The curfew was still in effect.

Demonstration of women with spatulas in hand. Photo: RD

The negotiations continued all day Saturday. It was a tense wait at home, with a tenuous connection to the Internet, the only source of news, practically isolated from what might be happening and with a constant trickle of rumors. There were demonstrations all over the country asking the military to react against the coup. The women took to the streets as they had done in October, to demonstrate with their kitchen spatulas raised into the air. The head of state Major General of the Armada broke his silence and condemned the coup and the RSP’s violence, and asked the populace to have faith in the national armed forces, who were in contact with all national and international parties in the crisis in the search for a way to regain the peace.

The declarations gave me peace. That they had not entered into action and had allowed the negotiations to go forward was avoiding a true blood bath. At the end of the third day of confinement at home, they announced that the negotiations had been fruitful and the Transition would soon return, details of which would be forthcoming first thing Sunday morning. The provisional count stood at 10 dead and 100 wounded. We went to bed trying to control our joy over what seemed to be good news, and praying that the results of the negotiations would be to everyone’s liking. Yet we were quite skeptical, as it was rumored that Dienderé had negotiated amnesty for himself, and that the people would not accept. 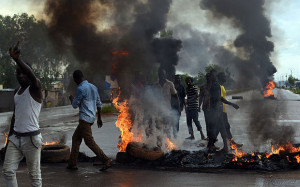 Sunday, the 20th we waited in vain for the promised declaration of the negotiations’ supposed “good results.”  But nothing came. Instead, we awoke to the rumor that the RSP had sequestered the French and American ambassadors, along with several local politicians, in the hotel where the negotiations had been held, negotiations that had supposedly ended the night before. Thank God it was nothing more than a rumor, but it was the kind of rumor that makes you roam around the house aimlessly. In that hour, a bunch of possible scenarios passed through my head, in the case that the rumor turned out to be true. Rumors aside, the situation had gotten tense again in the negotiations that kept going all day. My biggest worry that day was that Wendkuni’s milk was running out. There’s no need to explain that since Wednesday, everything, absolutely everything: stores, gas stations, markets, banks, bakeries, etc., was closed up tight. But my friend Valea, my “Burkinabe guardian angel,” who has friends scattered all over the place, didn’t rest until she found a few tins in the shop of a friend of a friend of an acquaintance, who opened just for her. Again we went to bed without news, unsure, though calm and confident, don’t ask me why, of the people’s “savoir faire.” 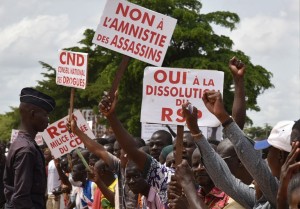 Monday the 21st, the army got involved, albeit peacefully, giving Dienderé an ultimatum for giving up and surrendering his arms. What had originally been a rumor about “tanks ready for battle” was in reality nothing more than military units closing in on the edges of Ouaga. Even so, I can’t deny that this military gesture robbed me of the peaceful and trusting sleep I’d managed the other nights. For the first time, I decided to pack a small backpack with passports and the basic necessities for Wendkuni in case we had to run off in a hurry… 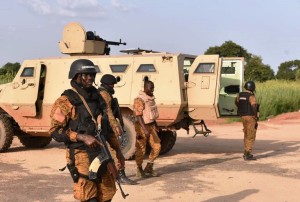 Military units at the edge of Ouaga. Photo: Sia Kambou/AFP

Tuesday the 22nd, the CEDEAO met all day to debate the proposal to “get out of the crisis,”with which only the participants in the coup were satisfied, as it was said it contemplated amnesty for them and the possibility that the banned candidates could run for office. We went to bed to the announcement that new CEDEAO representatives would arrive the next day to look for a solution, as the current ones could not reach an accord. And with the military, who were still stationed at Ouaga’s city limits, waiting on a peaceful solution. 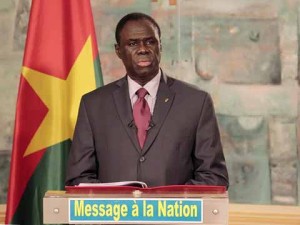 Wednesday the 23rd finally arrived, exactly a week after the coup d’état. That morning, without further ado, Kafando announced his return to power and the restoration of the Transition Government, putting an end to the coup d’état. The news left me quite bewildered, especially since it had been announced that six heads of state would visit that day to negotiate the conditions of Dienderé’s stepping down. And it was Dienderé, in I don’t know what capacity, rather than the recently reinstituted Kafando, who received them at the airport in royal fashion… That night we went to sleep with the good news that our embassy had “lifted” the recommendation to stay in our homes, and that the curfew had been reduced to between 11 pm and 5 am. 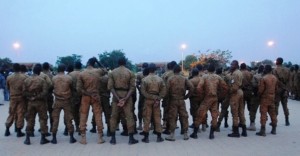 Wednesday the 23rd’s announcement of the end of the coup was followed by a week of delicate atmosphere during which the RSP was disarmed. There were a few delicate moments in which the mandate to stay at home was put back in place, as some RSP members mounted a resistance and the army had to attack a camp with heavy artillery that resounded loudly in our house… But once they were disarmed and Dienderé gave himself over to justice after spending 24 hours hiding out at the Nunciature, it could be said that everything was back to normal. 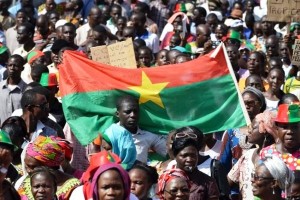 The Burkinabe people’s strength, composure, serenity and faith in Providence are their strongest weapons.

We had had every hope and a fervent desire that a truly democratic process could go forward once and for all in an African country. With the coup d’état, it seemed that it could not be. And while it is true that from today until the elections take place, anything could still happen, it’s also true that this latest crisis and the way it was handled have strengthened the great faith, confidence and love that I have for this people. A people able to surmount great crises; but more importantly, able to surmount many and complicated small everyday difficulties with the open smile, the composure, the serenity and the faith in Providence that are in the end the greatest weapons of all!