Consequences of Increasing Insecurity in Burkina 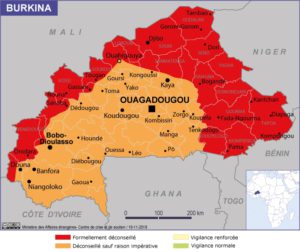 The consequences of the increasing insecurity in Burkina, due to daily terrorist attacks, are becoming dire. More than 2,000 closed schools have left almost 400,000 students on the streets and more than 9,000 teachers without a job this academic year. Added to that are more than 80 closed medical centers, leaving an extensive population of more than 600,000 people unattended and in a precarious healthcare and humanitarian situation, and the massive displacement of more than 500,000 people.

Thank God, Rimkieta – which, I remind you, is town on the capital’s periphery – hasn’t yet suffered the direct effects of these attacks. But I’m afraid it will soon begin to accommodate displaced people that seek refuge in the nation’s capital.

Unfortunately, I know without a doubt that many NGOs that work in the conflict area are having serious problems doing their jobs. Manos Unidas and Aviacion sin Fronteras are amongst them.

Yamlaminim (“Do as your heart dictates”) is another. I share with you their cry for help, as I consider them to be an honest reflection of the increasing insecurity in the country that can help take charge of the scene where we live. What’s more, Sara and Gonzalo are close friends.

It could be said that FAR, Yamlaminim and many other NGOs share the same goal. It’s not about competing with each other, but rather working together; so if anyone wants to give Yamlaminim a helping hand, they should do what their heart dictates! 🙂

I address all of you who have been supporting us over the past 13 years in one way or another, to ask for your further collaboration in order to attend to the new needs brought out by the insecurity in the country. 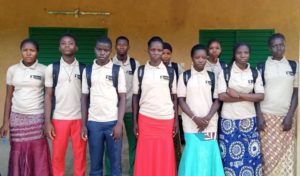 Comin Yanga students sponsored by Yamlaminim. They had to move to Doutenga because the school in their village was closed.

The spiral of attacks has been increasing since 2016, reaching grave levels in 2019. You’ll remember that in March 2018, Gonzalo accompanied us to visit one of our projects immediately after an attack on the capital. Until then, the worst problems had been in the Sahel area bordering Mali. However, this year they have extended to the rest of the area, also affecting the central-eastern province, where the Comin Yanga Municipality and most of our infrastructure projects are located: schools, wells, libraries, medical centers, a grain mill and where more than 52 of the 147 sponsored boys and girls live.

The situation has forced many schools to close due to the lack of teachers, who are scared to commute to the most dangerous areas and demand protection from government military detachments. One of the schools is in the village of Comin Yanga. To ensure that the students don’t lose a year, we have been forced to enroll them in another place, several kilometers from the village – a nearly impossible route to cross daily. So we have to provide them with lunch, dinner and lodging. To house these boys and girls we had to rent six rooms, at a total cost of 150€ per month. As to dinner, feeding everyone costs 336€ monthly (approximately 0.3€ per meal. Fish and meat are not included in the diet). These costs add up to an extra expense of 486€ per month. The Doutenga school, which has made an extraordinary effort to receive them, has asked us to provide these children with desks, which will cost another 1,050€. 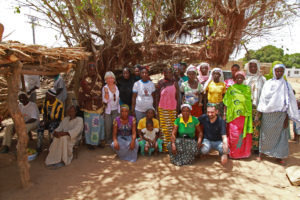 We have also decided to renew the microloans for the Women’s Cooperatives, so that they can continue to finance their entrepreneurial activities and feed their families. Another problem that is getting worse is the lack of food. People move in fear, leaving their crops behind. The Burkina food crisis is, according to the UN, “an unprecedented humanitarian emergency.” They say it affects 700,000, but I can assure you that many more than that are hungry.

The violence has also left half a million people without medical assistance because the medical centers are unattended. Unfortunately, we haven’t received the subsidy for the treatment of critical malaria for children under five years old, which we had been receiving since 2009. Thirty euros (30€) is the difference between life and death for a child who has contracted this illness. We achieved in these years a 0% mortality rate. Without our help, the rate would likely be like that of the rest of the country: 20%. We treat some 150 patients each year.

As you know, YAMLAMINIM has neither members nor patrons, so we rely on your generosity to cover the extra costs of supporting these people in danger zones, for malaria treatment and to mitigate the food crisis in the villages where we work. 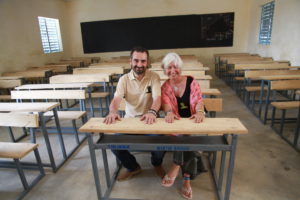 Gonzalo and Sara, in one of the classrooms of a village school in Yarcin, built by Yamlaminim.

With a small sum we can help both our sponsored children and the villagers whose only hope is that Yamlaminim gives them a hand.

We will also have 2020 calendars on sale, with fabulous photographs, and a re-cap of past calendars. Because of the dangerous situation that we have described, and for our safety and the safety of our agent, in 2019 we have not been able to travel as much as we would have liked, and as we have done over the last 12 years.