Electricity as a luxury

Electricity as a luxury

I’ve been short on inspiration for a few weeks. Nothing to be worried about; the accurate diagnosis being the heat of this time of year. Then, on Sunday, May 16, the World Day of Light was celebrated, and as if by magic, and appropriate to the cliché, “I saw the light!”

The truth is that I am not a big fan of “the world days of”…., but I recognize that they are useful, insofar as they call attention to, or at least recall, frequently overlooked realities. In the case of light, this is to understand the importance of having access to it.

The situation in Burkina is certainly discouraging: only 45% of the population has access to electricity, with only 30% of its consumption produced by Burkina itself, which needs to import the remaining 70% from Ghana and Ivory Coast. This raises the cost of electricity to 20 cents of € per kWh, while, in Spain, if I am not mistaken, the “classic tariff” is less than 15 cents per kWh. I won’t even get into the cost of the electricity supply for the FAR, which can only be reduced by solar panels, with a very significant installation and maintenance cost! 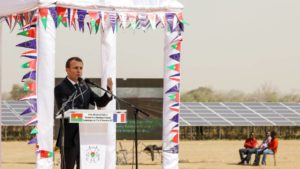 In Rimkieta, the vast majority of houses do not have an electrical installation, nor for that matter plugs to charge cellphones, nor switches to light a lamp. Not to mention a fridge to store food, or a simple fan to relieve the sweltering heat of the better part of the year. And, obviously, no washing machine, television, computer or Wi-Fi, which are real luxuries for these parts. Can you imagine spending just 24 hours in these conditions?

Since my arrival in Burkina more than 16 years ago, not only have I not noticed any improvement in this matter, but I would even venture to say that it is getting worse by the year. This is not for lack of efforts by the government.  I remember well when Emmanuel Macron came to inaugurate in 2017 what was at that time the largest solar power plant in West Africa. Yet, the growth in demand is far greater than the capacity to expand production in Burkina, and in imports from Ghana and Ivory Coast, not to mention the tax collection effect, which the tariffs are sure to contain. 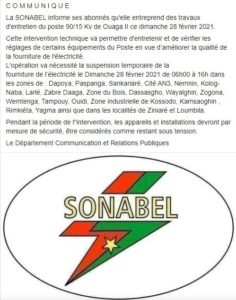 SONABEL statement informing in advance of power outages. It is appreciated, although it is usually rare …

As the Director General of SONABEL (Société Nationale d’Electricité du Burkina Faso) explained to us a few days ago, trying to justify this year’s power cuts (far greater than the already excessive cuts in previous years), both Ghana and Ivory Coast are suffering an unusual drought. This has forced them to close several of their hydroelectric power stations and to reduce the amount of electricity they can export to us.

COVID-19 does not help in this matter either, as it has forced a stop in the construction of a new solar power plant that was already underway.

The consequences of the shortage of electricity – essential for development and quality of life -are innumerable, both socially and economically.

It is difficult to concentrate in class during these months of heatwave (about 45ºC), in excessively overcrowded classrooms (an average of 80 to 100 students per class in most public schools), without even a measly fan …

A boy who leaves school at 5pm and has to walk or, with luck, pedal, more than half an hour to get home, has, at most, an hour of light to study and do homework. Dark falls here at 6:30 p.m.. I am still amazed to see how, at nightfall, young students take advantage of any point of light, such as the lampposts on the paved roads in the center of the capital, to sit on the floor with their notes to study. This is what makes a simple light bulb, with a large blackboard, so important to facilitate children’s study outside the cyber building of the CCB (Christian Base Community), near the Mill and Cereal Bank and the “Luis” well and the “Placita,” which we treed and surrounded years ago as a shaded meeting place for area neighbors.

Studying by the light of a street lamp. Photo: film “L’espoir de lampadaire”

The lack of access to electricity also has a negative effect on the day-to-day life of girls who, from a very young age, have the daily obligation to go and get firewood or charcoal first thing in the morning to cook.

Additionally, the consumption of firewood has harmful effects of deforestation, which we try to alleviate through our tree-planting project. Burning wood, as well as coal and other fuels like kerosene, leads to a high degree of contamination, causing irreparable damage to children’s respiratory systems, even causing death.

Beyond the problems of not having access to electricity, we have those arising from the poor quality of what electricity can be accessed. 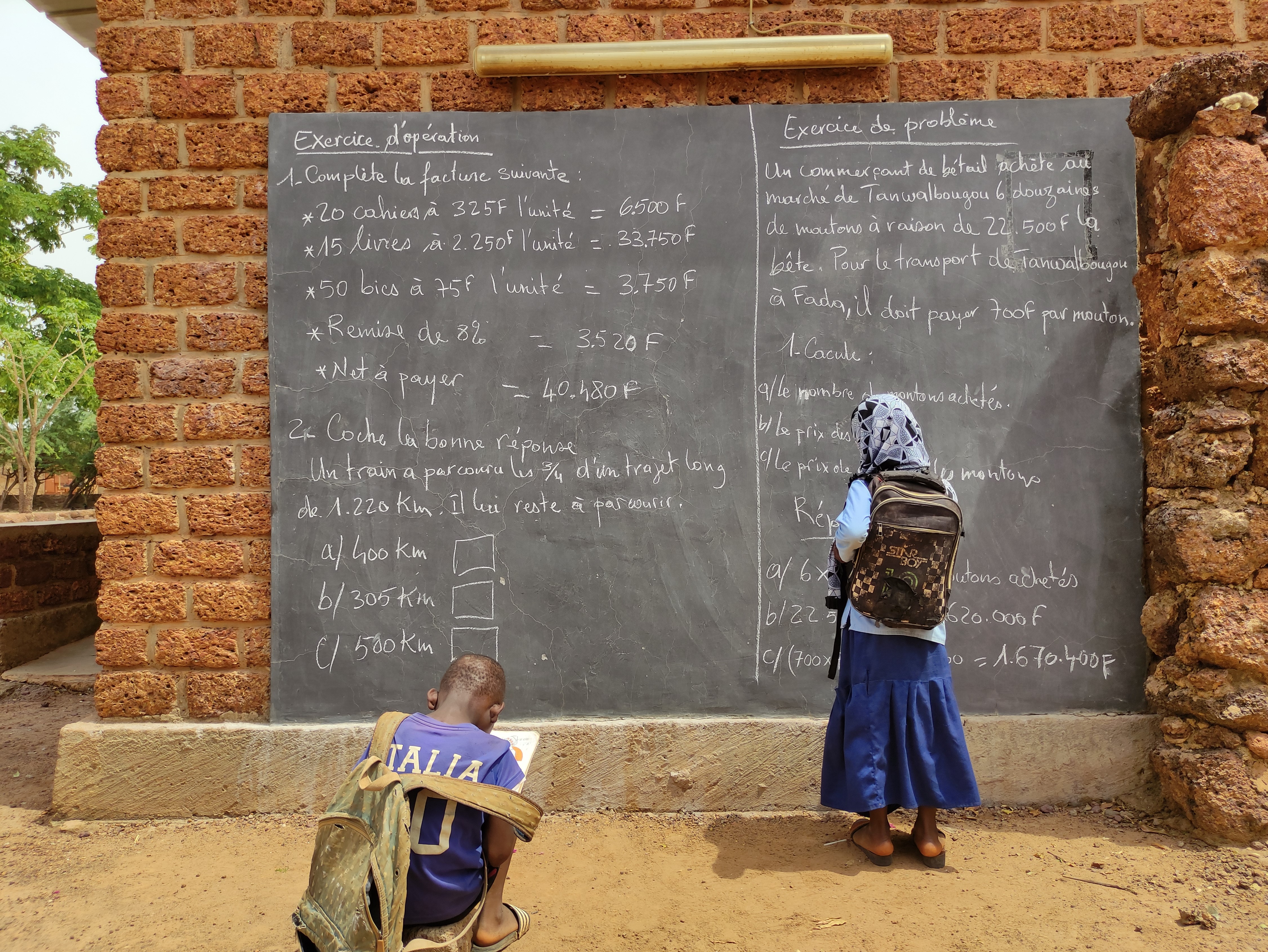 Lighted blackboard project at the CCB so that students can do their homework and review at sunset.

In 2019, (there is no data for 2020), there were some 150 power outages over the course of the year – equal to a blackout every two and a half days. This does not even account for the hours of supply of minimum voltage, insufficient for the proper functioning of most appliances and machinery. A power outage means countless losses for the small traders who depend on it and increased food insecurity, due to poor maintenance and damage to electrical appliances.

Precisely as I am writing, we have been without electricity for a couple of hours. Thanks to the voltage converter system and batteries that we have installed, we can continue working. I am aware that bearing up under power outages is in itself a luxury, insofar as it means that we have electricity in the first place.

I could go on at length, but I think it’s enough for my first post on the World Day of Light. It is on my agenda and next year you will have more.to update you next year

Let’s keep it up!