I’m adapted to the sound of truck tires exploding, which is rather common here in Burkina, though I must admit it always catches me by surprise and startles me for a few seconds.  Yet the great explosion of last Friday March 2nd morning, and the accompanying tremors, didn’t just frighten me, but rather 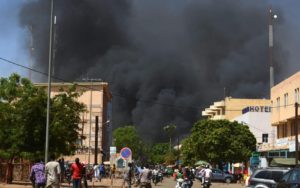 turned me to ice, even in the still 38 degree heat… The thing is, the explosion, which I later learned happened some 20 kms from Rimkieta, sounded as though it had come from next door to FAR, but with a force not characteristic of a simple tire.

Milliseconds later, a call from Sylvie brought the blood back to my veins.  Sylvie, who has managed FAR projects since we got here, called from the city center, where she had been doing errands. She told me that she had been on a motorbike when she heard the explosion followed by gunfire, and that she had hidden in an insurance agency along with others who had been on the street.  I tried to calm her down by telling her she would be safe there and not to move until further notice.  This was at ten o’clock in the morning…

The two hours after the explosion, with constant bursts of gunfire that my husband Patrick could hear from our house at around 10 kilometers from the scene of the events (thank goodness I couldn’t hear anything from Rimkieta), were ridden with anxiety and rumors.  Everything pointed to yet another coup d’état.  But in the end it turned out to be just (forgive me the “just”) a double terrorist attack, on the Joint Chiefs of Staff and on the French Embassy.  The total fatalities came to 8 military p 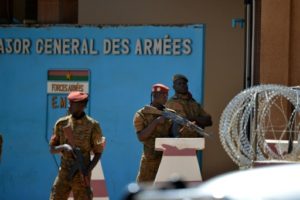 ersonnel and 8 attackers.  There were also 80 wounded, mostly from stray bullets of accidents caused by the ensuing panic.

The causes are still not confirmed.  It looks like a “warning” from an imprisoned general whose trial for “alleged participation” in the 2015 coup d’état is still pending… Behind it, perhaps the ex-President Compaoré, now a nationalized citizen of Ivory Coast… A post is not enough to explain the ins and outs that support this conclusion, but it’s fairly logical.  It leaves me rather anxious, really, as the case is not resolved, which is to say that it is not over… 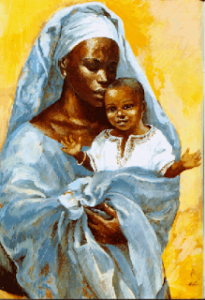 “Union de prière” to the Virgen of Peace

In those two hours after the attack (I won’t lie to you) just for a few seconds and surely due to a mix of anger, frustration and helplessness, a thousand thoughts passed through my head as to the wisdom of staying here… above all as I am a mother… all this while at the same time evacuating all the children and personnel from the Maternelle.  The two places I had considered to be the safest in the whole country had been attacked in broad daylight, just like that… But they were only a few split seconds…. If what the terrorists want is to send us running for the hills, they’ve caused the opposite effect.  Here we stay, with renewed energy and will, from the overdose of support and affection we’ve received from all of you, and for which I thank you with all my heart!

Please pray to the Virgin of Peace in Burkina, another of my father’s inventions… J. Because without peace, few things are possible, especially among such sweetly peaceful people like the Burkinabés.  We keep on going together…. And we will keep on…