Mothers’ Literacy: Much More than Numbers and Letters!

Mothers’ Literacy: Much More than Numbers and Letters!

ning to read and write allows us to integrate into society, to leave ignorance behind and to improve our daily lives.” This is one of the answers to the end-of-year “satisfaction survey” from one of the women served by the “Mothers’ Literacy” project. It couldn’t sum up any better the greatness of this project, which is much more than teaching numbers and letters!

There is no doubt about the “power” of literacy as a basic tool for development, the eradication of poverty, the promotion of gender equality and for giving humanity a boost…

In Burkina, many things make me smile. One of them happened to me this morning on my way to the office. I saw Christmas decorations and lights in the streets. Not in all of them, though.  They were displayed only in a couple of blocks of paved road that cross the city. This weekend, the Pan-African Film and Television Festival of Ouagadougou (FESPACO), which is the most important such festival on the entire continent, will begin on those blocks. And I cannot help but smile a half smile of affection to see that they have taken advantage of the lights and ornaments, clearly Christmas-themed, to decorate with a festive air those two streets, the Festival epicentre.

I’m moved even more to cross paths every Wednesday afternoon with the beneficiaries of the “Mothers’ Literacy” project on their way into class. These are the mothers of the Maternelle children, the street children, the unschooled girls and the scholarship holders. 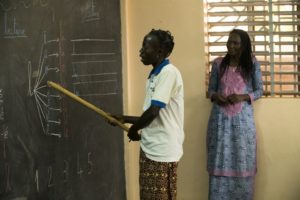 I am sure that many of the things we do seem like lunacy to them, such as the end-of-year “satisfaction surveys” of project beneficiaries. Yet later they realize that the exercise of answering the survey questions helps them gain awareness of the importance of attending the course.

We asked them, among other things, to share any situation in their daily lives in which they have realized that the literacy course has helped them. Some of their answers are touching: 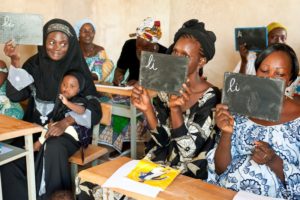 – “When a child gets sick and they give me medication, I can read the dose I have to give him.”

– “I can count the change when I shop in the market.” (Previously, they just took it, I suppose hoping to God it was correct…).

– “I can memorize my phone number and give it out by heart easily.” (This answer came from a woman who sells water on the street and for whom giving her number can create a relationship with potential customers).

– “I feel that if I speak French and know how to do calculations, people respect me more, including my children who are in school and know more than I do.” 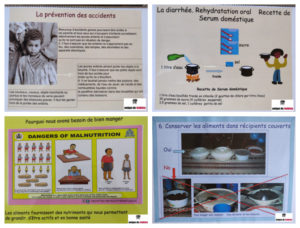 The women also highlight how nutrition, hygiene and health monographs have a positive impact on their daily lives. They are especially grateful for the document we give them on how to “implement” each monograph, as it helps them to remember what they’ve been taught to put it in practice. Thanks to the talks, they tell us, they have understood the importance of not buying medicines on the street, of trying to keep children away from the fire while cooking (it is very common to leave the pots warming up on the wood in the yard where the children are playing), and of keeping the mosquito nets they sleep under in good condition so they are effective.

Each and every one of the projects has “something special” about it. This one, without a doubt, has the special aftertaste of the atmosphere of trust that comes about naturally, in which women also take the opportunity to open their hearts and share their weekly trials. Like when the Spanish women of just a few decades ago went to the village laundry… to wash, yes, but above all to talk about their lives…

We pay tribute to these women, to their courage and determination, and give thanks to Rihanata and Mme. Hema, who are responsible for the project, for their devotion and dedication.