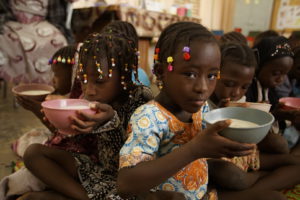 Maternelle’s children having breakfast early in the morning, unaware of any problem.

A few days ago, the news of an alleged terrorist attack at a school in a neighboring quarter of Rimkieta spread panic amongst the parents of the children in our programs. All the parents, that is, except those whose children benefit from the street kids project.

One effect that terrorists seek is to terrify people and to create a sense of insecurity in society, which becomes more vulnerable and unstable. Unfortunately, here in Rimkieta, they’ve accomplished this with a supposed terrorist attack a few days ago.

Our dear Léonie, who has been in charge of the FAR’s nutrition – the children’s and the staff’s – for more than 15 years (an anniversary that we celebrated in due fashion a few days ago), usually passes by our administration offices at the end of the day to pick up money to buy condiments for the next day. So, when I saw her come into my office early in the morning, trying to contain her nerves, I knew something was up. Her French is infinitely better than my Mooré (the language of the Mossi, the country’s ethnic majority), yet still pretty poor.  Nevertheless, she managed to inform me that her friend and neighbor in Tampouy (a neighborhood some 15 kms from Rimkieta) called to tell her that armed terrorists were attacking a school near her house. I didn’t have time to react before Mme. Hema, the maternelle’s deputy administrator, entered to tell me that nursery school parents were arriving to pick up their children. 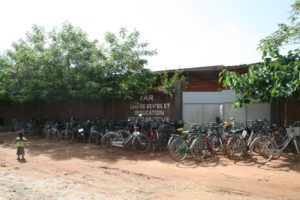 Mom’s bikes who came to pick up the children piled up at the entrance door.

The first thing I did was to call the INSO – an NGO whose mission is to support humanitarian workers’ security in “risk contexts” (we are very grateful to them for “taking care of us”) – to get pertinent, reliable information. INSO was aware of an “incident,” but lacked confirmation about an armed terrorist attack. They told us to end the children’s day early and wait for further news.

I gathered the entire staff, whom I found worried, but keeping calm. Most of them were already aware of what had happened, though – as usually happens in these cases – they had heard different versions of the events (some of them pretty hare-brained…)

We set in motion the protocol we contracted last year from a security company. The boys from the street kids project, which has its own center in front of the maternelle, came to our facilities. We gathered the 300 nursery school children and 15 streets kids in one of our six classrooms. And we headed to the maternelle’s entrance doors, where mothers and some fathers crowded together (more than 100 people in barely 10 minutes), nervous to pick-up their children, fearing, I guess, that after the “neighboring” school (some 15km away) was supposedly attacked, the maternelle would be next!

Nothing is impossible in this world, but I dare say that an attack on the maternelle is highly unlikely. Fear doesn’t contend with logic, and the fact that the parents reacted the way they did to a rumor reveals the current state of society. And, unfortunately, it isn’t unwarranted: Over the last two months, the attacks – most of them at the border, and some of them directed at civilians – are constant. There have been clear jihadist attacks, but others (especially in the east of the country), seem to suggest a civil war nature… against the capital’s central government.

New 15 children of the 12th promotion of the Street Children project.

Just before addressing the parents, to calm them down and, obviously, to let them pick up their children, I received a call from INSO. They had managed to confirm that it wasn’t a terrorist attack, but rather an accidental explosion. I informed the parents and encouraged them to leave their children at school, but all of them preferred to take their children home. After a first wave of 150 kids being picked up, most of the rest of the parents trickled in. In less than 45 minutes after the rumor began, we were left with only 9 children in the maternelle (who finished their day as usual) and with the 15 boys from the street kids project being educated by FAR.

I know it is no coincidence that none of these children’s parents showed up; precisely because of that they are called street kids. They are children who lack any sort of emotional and affective care – not to mention protection, or guidelines or examples – because even though they have a basic family infrastructure behind them, the harsh and precarious poverty that their families barely manage each day don’t leave room for care.

This incident of a rumored terrorist attack on a neighboring school in Rimkieta has served to confirm how well all our staff reacted to this type of “impossible” event (as I mentioned worried but calm).

For my part, it also reminded me how incredibly vulnerable the street kids are. Seeing them sheltered in their FAR education center, or receiving vocational training in a workshop and enrolled in school, sometimes I forget. I think that the “street kids” project is undoubtedly our most complex, as I’ve said on several occasions.