Pedaling 12km/hour or Walking 2.5km/hour, Quite a Difference, by JCVD 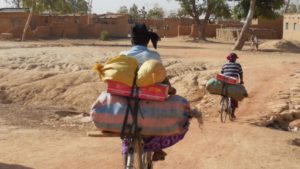 Bikes as the only possible mode of transportation. Two Zongo women carry their small businesses’ goods

In what we know as the developed world, a bicycle is a sports or leisure equipment.  That was the use for which it was invented in 1817 thanks to Baron K. Drais’ ingenuity. But bikes aren’t used for fun or exercise everywhere.  Three are places in the world where bicycles are the only possible means of transport.

It is estimated that there are some one billion bicycles in the world being used for transportation or for exercise.  The growth of the global pool of bicycles is unequal where its main function was for fun or for exercise – until the electric bike appeared a few years ago – and where its use is completely different and has more to do with survival… The bicycle as a means of transport, which until recently was only used in some flat countries, is expanding to many cities thanks to new batteries that hold large charges in relation to their weight. But that’s not how things are everywhere in this world. 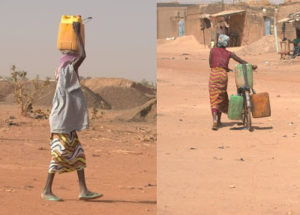 The majority of those billion bikes are probably not employed either for fun or for sport.  In many places a bicycle is a treasure that makes moving from one place to another at speeds of 10-12 kilometers an hour possible in places where the temperature impedes the locals from walking faster than 2.5 kilometers an hour.

This is how things are in Ouagadougou, Burkina Faso’s capital, and in particular in its Rimkieta neighborhood, as in the rest of the countries subject to the Sahel’s harsh influence.  Irregular terrain (flat but sandy and covered with potholes caused by the annual rainy season), high temperatures (most of the year above 35 degrees Celsius with several hours a day above 40 degrees), with long distances to cover (Rimkieta is some 30 square kilometers – let’s say about a third of the size of Barcelona), its inhabitants don’t have it easy to move, to socialize, shop or do business, take classes, get to prayers, to the doctor or the healer. 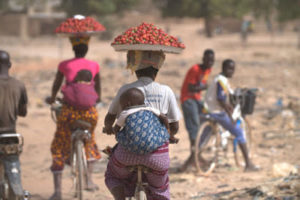 A bike means getting further with less effort

A few years ago we realized how many things can fit on a bicycle when it’s the only choice, and I got it into my head to provide bikes at a subsidized price.  I saw bikes carrying several people, furniture, animals, sacks…it seemed it must be quite useful.  And we found out that in fact, our women had little opportunity to acquire one because they cost the equivalent of 2 or even 3 months’ the basic wage.  What’s more, we thought, a bike could give any woman the autonomy to go elsewhere to work. So we got to it.

So that’s how we have wound up providing over 3,000 bikes in 5 years – 45 every month except August, and 200 in December – for a total of some 700 a year.  700 bikes a year are neither many nor few… they are those our local team is able to manage and administrate carefully:  keeping a file on each bike and a contract with its beneficiary and her two “moral” guarantors; keeping track of its repairs (half of which are paid by the bikes future owners in order to help them get in the habit of taking care of things, which is not something that exists in their culture…); providing road safety awareness; billing each beneficiary 3€ a month (some 2,000 Fcfa); and finally handing the bike over… all in all a lot of work. 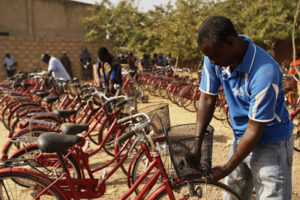 The last touches before entrusting the bikes to their beneficiaries

This project’s social impact is important, because for an estimated population of some 95,000 people in Rimkieta, and supposing 4 people benefitted by each bike, we’ve probably “motorized” about 12,000 people – more than 10% of the population.  These are people who now trade in this or that, who visit others, who take children to school, who go to health centers, and who didn’t do those things before, or only did them in cases of extreme necessity. At FAR we don’t specialize in reaping our successes, but I’m certain that the social contribution of the “bike project” is very large, as just by looking at the beneficiaries’ faces when the bikes are entrusted to them each month, you can feel that inner joy of doing good.  It would be hard to describe any of those faces in those moments… the closest image might be that of children before Christmas gifts or the tooth fairy’s treats. 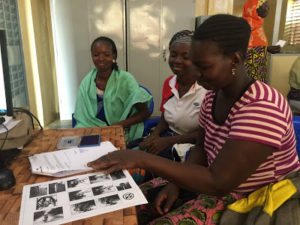 The beneficiary signs the contract for the purchase of the bicycle, observed by her two moral guarantors

Sylvie, the FAR team’s first employee, can bear witness to all this, as she lives the project as if all the bikes were for her.  Drissa, the head of the street kids and sports training programs, can speak to it too, as he is responsible for getting back the bikes that haven’t been paid for, as can María Bacardit (known as little María), who supervises the project, or Eva, who takes care of the Barcelona end.

Thank you so much for all your support and for spreading mobility and above all, joy. 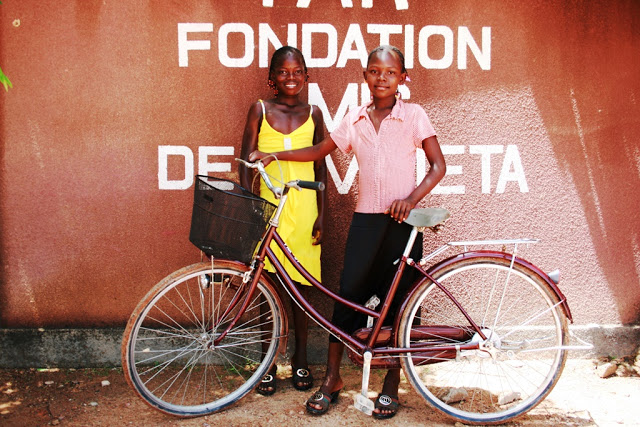