“Dans la causerie du dimanche, nous avons appris aux enfants qu’ils doivent tous apprendre à vivre ensemble, comme des frères, et favoriser la compréhension et l’amitié entre toutes les nations et tous les groupes raciaux ou religieux, sinon nous allons mourir ensemble comme des idiots”  (“In the Sunday talk, we explained to the children that they must all learn to live together, as brothers, fostering understanding and friendship between all nations and all racial and religious groups, otherwise we will die together like fools”). So describes a report by Jacques, who leads the street children program, about one of the formative talks we gave.

Reshaping habits and references, that is to say values, in a child who has been wandering the streets for a long time with the sole daily goal of finding something to eat, sometimes at any cost, requires dedication, patience, and above all, clear ideas, strength and perseverance. It’s not just about feeding his body, which is a must; nor is it simply a matter of filling his empty little head, which is necessary. It is, above all, about trying to redirect his personality. Because the maxim “survival first,” even if it is natural law, may end up justifying a worldview that is not only selfish, but even predatory. 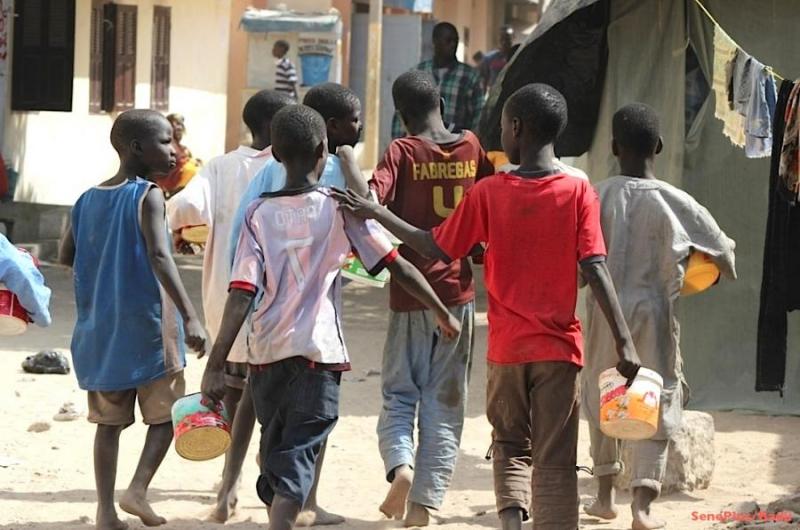 Street children, ready to beg with their cans. Photo: Senvisions.com

Those children who, with or without a roof for the night (there, rooves are scarcely needed to survive, except during the rainy season), roam the streets day and night in need of food, are called “enfants de la rue” (street children). Most of them have no family. The families some do have are so broken by misery that it’s as if they didn’t have one at all. In the absence of any minimal reference point from parents, the only one they have is that of other children like themselves, destitute and profoundly lonely. Surviving at any cost is the sole goal of their wandering. To manage it, anything goes: stealing, trafficking, prostitution. 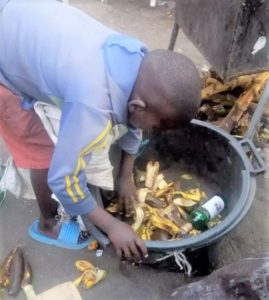 Looking for something to eat in the trash

The saying “hunger is a bad counselor” acknowledges that, in situations of extreme need, we may stoop to performing reprehensible acts we might regret. Worse yet some may commit acts for which they do not even feel remorse, due to lack of moral compass – that conception of decency in a person’s cultural background that leads him to a sort of repentance.

Common knowledge is rife with expressions and sayings of this sort: “One can get used to anything, except not eating”. This adage, which hardly needs explanation, refers to the fact that human beings generally have the ability to adapt to any kind of negative circumstance. However, there are certain primary needs that must necessarily be met.

There are street children in all the big cities, more or less out of sight. In Barcelona itself or in Madrid there are slums full of children “of” or “on” the street, who are similar in that they have neither physical nor moral support, and their vital energy comes from the desire to live spurred by a kind of complete insecurity, even regarding their most essential needs. Pope Francis has called them “discarded, because no one takes them into account, regardless of their age. and their disappearance is not only unnoticed by most, but is even desired by some. 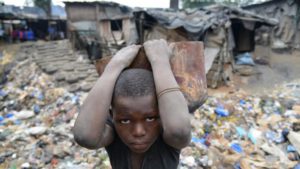 Looking for something to resell in the trash. Photo: RFI

Each of these creatures is, then, a true survivor, and in the future, a potential social predator. “Primum vivere, deinde philosophare,” according to the old Latin adage.

You can imagine, though it is hard for most Westerners, what these unfortunate children feel every morning upon waking: “Let’s see if today I can eat… anything.”  It is said that in the Sahel, the greeting “good morning” is not merely a courtesy but, at any time of day, it carries the implicit message ” I have eaten today.”  Mustn’t it be even more so for these children!

More than fifteen years ago, our beloved Idrissa – at that time in charge of educating the children through sports training, which was his life – convinced us that there was a group of children called “enfants de la rue” that deserved our efforts. We gathered from his compelling argument that it was very likely that he knew what he was talking from personal experience… We never asked about it, out of respect. Yet, we’ve always been convinced that it was no coincidence that Idrissa had that fixation inside his heart. 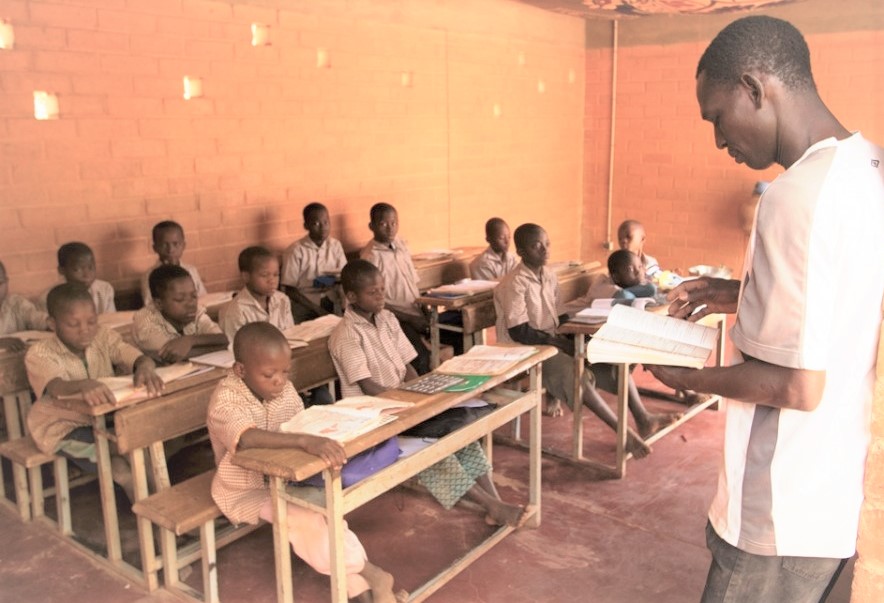 We soon began a project to locate and to comprehensively protect children at serious risk of social exclusion, who were willing to adapt to certain rules. Only fifteen of them a year. We have involved ourselves in the lives of almost a hundred and fifty boys who are nourished, trained and educated. Some have returned to their lives with a craft and basic studies. 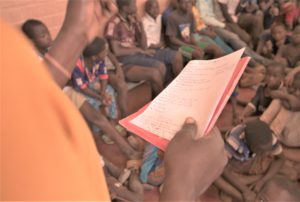 Script of one of Sundays’ training talks

The task is laborious and not simple. For example, in order for street children training in workshops to attend, we have to give them a sandwich first thing in the morning, as they have most likely had practically nothing for dinner the night before.

Furthermore, it is not enough to care for their bodies and their minds. Many bad habits must be redirected, a result of their circumstances and the company they keep. It’s a question of cultivating that good and positive nature that we all have inside, but that can end up obfuscated by circumstances that can oppress even the strongest and most balanced among us. Consider, for example, the current situation millions of “Westerners” are going through. After months of oppression by a pandemic, uncontrolled in most countries, “we feel off” – we are disturbed. Adults! How must chidren feel? 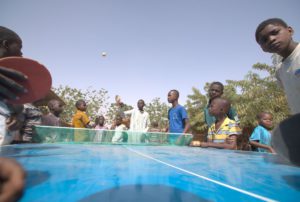 Within the cultivation of a person, it is essential to illustrate and to explain to these young people – as surely no one has done before – that good is good, and evil is evil, in so very many facets of life. One of them, a delicate one, is the essential equality of every human being, and the value of non-utilitarian friendship. If someone has not exposed himself to that light, and his medium is darkness, he will be hard pressed to discover that the other is worth as much as he, and that his friendship is something natural and unrelated to even legitimate self-interest.

On Sunday mornings we offer an activity aimed at all the children of the project, (this year there are 136 of them), at the CIEPYD (Educational, Professional and Sports Integration Center), which we built for them in 2007. The boys are attracted by games and sports (football leagues, ping-pong and foosball) and music classes (they love music!) or theater, as well as by butter sandwiches and the local colacao. They have fun and socialize in a healthy environment, and Jacques and his team talk to them about principles of health, hygiene, citizenship and culture, as he explained in his report.

This is what we are up to. We have had all kinds of experiences and results, mostly very positive. Some “ex-street-children” have learned a craft and are leading lives of ordinary citizens.

Moments of dance and joy in the musical activity on Sundays