While we were designing one of this year’s new projects, the awareness campaign against FGM (Female Genital Mutilation) – a practice prohibited and penalized in Burkina Faso since 1986 but unfortunately still very active – none of us could have imagined how much impact it would have within 48h after launching it. This has me smiling as I sit at my computer.

It is FAR’s standard managerial practice to successively evaluate the results and objectives achieved, and to set out potential areas for improvement.

We had a meeting this morning with the people in charge of the public Social Action with whom we are working on the aforementioned awareness campaign against FGM we just undertook. 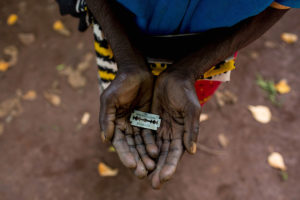 As the meeting began, the two agents skipped the greeting protocol that precedes all meetings (shaking hands without releasing their grip until they’ve inquired about you, your family, your work, everyone in your “village” [everybody has family in a village] your health, etc). Instead, they immediately and joyfully informed us that they had arrested three “vieilles sorcières” (old witches, which is what they call women who practice mutilation here), who were found about to mutilate a two-year-old girl, while two more infants “waited their turn” in their mothers’ arms…

This was possible thanks to a man (who attended one of our awareness sessions and wants to remain anonymous) reporting that he thought that one of his neighbors was going to undergo this atrocity. It was providential that when officials visited the neighbor to verify the claim, they encountered the scene and were able to put a stop to it.

As I was saying, none of us could have imagined such an immediate, tangible result from the awareness campaign.

We also couldn’t imagine the lively debates after the sessions, where we confirmed that many of the myths regarding the issue are still alive and well (such as: it improves women’s fertility, it prevents illnesses in newborns, it makes women happier, it is compulsory in some religions, or that eradicating it is a white-man’s endeavor to erase their traditions and to impose ours).

We also couldn’t imagine the severity of some of the testimonies the attendees shared with the others present, among which I would highlight:

A.M., 35 years old, one of the maternelle children’s mothers: “an acquaintance of my husband married a woman who wasn’t mutilated, and he convinced her to do it. Because of the wound, the woman was left physically impaired. Then, because the husband could no longer have relations with her, he left her for another woman. We can’t and shouldn’t tolerate these things!” 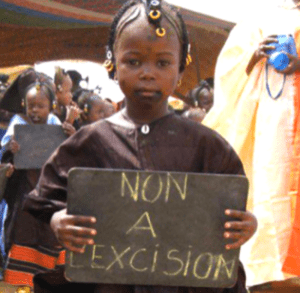 B.R., 62 years old, the grandmother of one of the kids from the street children project: “At 62 years of age, I have lived through a drama because of mutilation. 40 years ago, a young woman died with her baby in the delivery room because her child couldn’t get out due to the mutilation, Medicine wasn’t very advanced back then, and furthermore, we were in the village, so the doctors couldn’t do anything about it. Their suffering was terrible. Her husband couldn’t rebuild his life and wound up alone for the rest of his life.”

A.K., 26 years old, one of the maternelle children’s mothers: “I’m probably the youngest one here. I think that mutilation is a crime and I want to ask all of you to be aware of the harm we are doing to our mothers, sisters and daughters, so we can stop this murderous practice. Let’s open our eyes to this reality!” 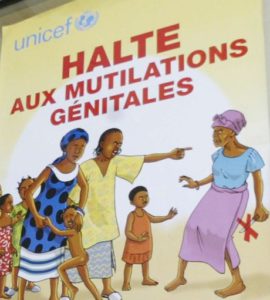 K.P., 51 years old, the father of one of the children from the street children project: “I don’t usually talk during this type of events, but I’m listening to people today trying to justify mutilation as a good thing about our culture and I can’t stay silent. We must know that our grandfathers, great-grandfathers and great-great-grandfathers practiced it because they were ignorant of many things. It’s incomprehensible that in this day and age we shield ourselves with their ignorance to keep practicing it. My daughter’s friend was mutilated; after which she couldn’t retain her urination. We have to stop this practice!”

Our awareness campaign also includes support from FAR to women who have suffered it and want reconstruction. We are very lucky to know Professor Michel Akotionga, a prestigious doctor who volunteers his services to do this procedure.

According to the latest 2015 figures from EMCBF (Enquete multisectorielle continue du Burkina Faso), 68% of women between 15 and 49 years of age, and 11% of girls under 14 suffer mutilation. This means that the percentage within the women who have attended the awareness sessions is also high.

We pray that another result from the awareness campaign is that it encourages many of the women who suffer from it to free themselves from the burden the mutilation’s consequences imply, and that it spurs them to visit the professor!

Please pray for this as well, despite how far the problem may be from your experience!