A realistic image of the type of girl the “Education for unschooled girls” project benefits: a girl cleaning plates instead of being at school.

“AB’s case isn’t an isolated one; FAR saves lives. I believe you know this and that it’s only fitting that it be known.” Mme. Brigitte, child psychologist.

We divert to Mme. Brigitte all cases that require her professional assistance. Her knowledge on the subject (I don’t know her age, but she’s a grandmother and she’s been a child psychologist her entire life), is coupled with her vast knowledge of the Burkinabe sphere. Both are crucial to competently tackling the problems we encounter. 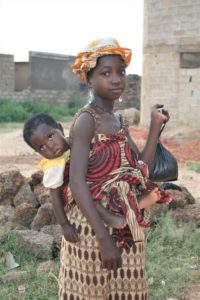 Another possible beneficiary of the “Education for unschooled girls” project: a girl, barely 8 years old, taking care of a baby, sent to buy the necessary condiments to make lunch.

You’ll remember AK (https://www.amigosderimkieta.org/en/avoiding-a-lynching/); the girl who was sexually abused by the shopkeeper. She is recovering well, even though there’s still a long way to go.

A few months later, we discovered that another girl, SS – 9 years old – had also been sexually abused – in this case by her paternal uncle. SS, whose father is dead, lives with her paternal grandmother in Ouaga because her mother can’t take care of her. Her grandmother knew about the abuse, but was unable to do anything about it, and had to look the other way, fearing for her son.

Mme. Brigitte works with both girls to heal the wounds and trauma caused by the abuse with the hope that they might be able to have a normal relationship with boys. In SS’s case, Mme. Brigitte also works with the girl’s grandmother, so she can win back her granddaughter’s trust.

AB is 13 years old and MZ is 12. They are two girls who, due to their fathers’ abandonment, live in secondary families (in AB’s case with a paternal uncle, and with a paternal grandmother in MZ’s case). The enormous lack of affection in situations like these leads them to seek it out by having intimate relations with “the highest bidder.” Starved for affection, these girls confuse the affection they find in having relations with boys with real esteem, care, tenderness and love. I applaud the relationship of trust Mme. Brigitte has built with each of them, and the openness with which the girls confide in her such a sensitive issue, essential in the road towards self-esteem.

Another image of a girl who, instead of being at school, is going to fetch water at the well.

There is no shortage of teenage pregnancies, either. RS, 16 years old, and ZM, 17, are pregnant. As with AK’s case (https://www.amigosderimkieta.org/en/pregnant-at-sixteen/), in accordance with their ethnic tradition, they had to leave their familial household to go live with the child’s father’s family because they were not married, fearing that their own father might die if they remained in their own home during the pregnancy. As I related in the post about AK, a teenage pregnancy here – in which the girls are usually ignorant of how they became pregnant – automatically means that they are expelled from home and move in with the boy’s family – people they don’t know. They can’t return home until they have given birth and their family has made the appropriate sacrifices to break the curse the pregnancy means for their fathers… Mme. Brigitte’s continuous support is indispensable in such cases.

Last but not least, in 9-year-old PK’s case, her parents have divorced and split their 6 children between them like assets. PK has to live with her father, to do the household chores. There are no shared custody arrangements or visitation rights here, so it’s highly likely that PK will rarely if ever see her mother and the siblings who live with her again.

Educating these girls is indispensable to their “salvation.”

After every session, Mme. Brigitte gives us a short report on the girls’ progress. In the last one she told me with great joy how much AB has progressed. She’s been a week now without seeking boys’ “affection” because she has come to her own realization that it isn’t good for her and decided not to. She finished her report telling me: “AB’s case isn’t an isolated one; FAR saves lives. I believe you know this and that it’s only fitting that it be known.”

She is right. Our day-to-day activity keeps us from realizing how the particular help we provide to AK, SS, AB, MZ, RS, ZM and PK to overcome their tragedies can save their lives. And as Brigitte says, it is only right that it be known; and even more so to thank you once more, everyone who helps us to help.  ¡BARKA, BOUSSOGO, BOUSSOGO, BOUSSOGO! (“Thank you so, so, so much” in Moore, the language of the Moosi, Burkina’s ethnic majority).