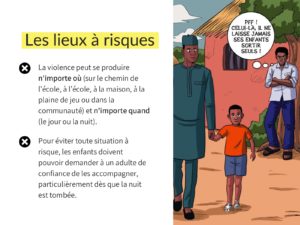 Following a recent case involving the sexual abuse of one of the girls in FAR’s “education for unschooled girls” project (the third… that we know of…), I discover “Out of the Shadows”, a 2020 report on child sexual abuse and exploitation by The Economist Intelligence Unit, which ranks Burkina 59th (alongside Pakistan) of the 60 countries ranked.

The index assesses the response of each of the 60 countries surveyed (20 in Asia, 19 in Africa, 10 in Europe, 7 in South and 3 in North America, and Australia) to the threat of child sexual abuse and exploitation. It uses 34 indicators and 132 sub-indicators, which seek to assess whether the country recognizes the problem of child sexual violence, and whether anything is being done to address and prevent it. It ranks countries from lowest to highest risk of child sexual abuse, depending on whether or not means are put in place to remedy this inhuman scourge.

While it is undoubtedly true that, as the report reflects, child sexual violence “occurs everywhere, regardless of a country’s economic situation or the quality of life of its citizens“, the problem in Burkina and other countries lies in the enormous lack of resources (as well as lack of will, I fear…) necessary to do something about it.

63% of Burkinabé women have been victims of FGM at an average age of 6 years. © The children of Bam

This new case involving one of the FAR girls (whom we will call OS) – raped by three boys – is added to the case of KA, raped by the seller of a grocery store (see post “Avoiding a Lynching”) and that of SS, raped by a paternal uncle (see post “Saving Lives“).

Each of the three cases has had its difficulties. OS’s is particularly complicated because, for the moment, we have to hide the rape from her father, as he would almost certainly blame his daughter and repudiate her.

The report “Out of the Shadows” states, “Child sexual abuse and exploitation are preventable, and there are strategies that have proven successful in reducing it, when government, civil society and the private sector act together“.  Although Burkina Faso has legislation in this regard, it has not yet developed a national action plan to combat the problem, and lacks the necessary government institutions and industry support. Furthermore, training and guidance for professionals involved in such cases of abuse is minimal.

Unfortunately, child sexual abuse is only one among a long list of shocking realities to which Burkinabé girls are exposed.

Female Genital Mutilation (FGM), despite carrying legal penalties – civil financial ones since 1996 and criminal prison sentences only since 2018 – remains a common practice in Burkina. “Justified” by cultural and social reasons, it is carried out in inhumane conditions that endanger the girl’s life and results in serious consequences for the subsequent health of the woman she will become. 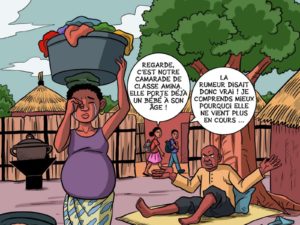 The same is true of child marriage. Girls are considered to be alien to their own families; As soon as they are born, they are the “property” of their future husband. In Burkina, 10% of young women who are now between 20 and 24 years old, married before the age of 15, and more than 50%, before the age of 18. Globally, 12 million girls in the world are “married” each year – 33,000 girls every day, or 1 girl every 2.5 seconds (source UNICEF). Thanks to the awareness campaign we carried out with all the girls in the FAR project, and to the courage of OA, who alerted us before it was too late, we were able to prevent her host family from marrying her at the age of 15.

Early pregnancies are another reality, which we constantly address in awareness efforts. Nevertheless, five of the girls in the project have become pregnant, have been expelled from their homes and have become mothers, accompanied and aided by the FAR. The road has not been easy for any of them. Two especially difficult cases were DM’s (she needed our help to fight against her own family’s intention to to take the baby and give it to a paternal aunt) and ZM’s (after giving birth, she was sent to the village, where she is still being by her own family until she marries the baby’s father, who is nowhere to be seen). 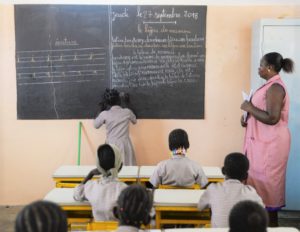 Faced with this reality, in addition to a comprehensive accompaniment of the girls who are victims of any of these abuses, FAR is committed to education and awareness building as a means of avoiding such atrocities through the “Educating Unschooled Girls” project.

To date, and since its inception in 2012, 20 new girls each year benefit from the project. This academic year (2021-2022) we attend to 20 girls in preschool education at the FAR, another 137 girls in school and 26 more in vocational training in workshops.

In adherence to our principle of action “to keep up more than to take up: permanent commitment”, and after a feasibility study, we will continue to invest in these means of avoiding all manner of exploitation of girls. Furthermore, we will include another five girls each year, benefitting a total of 25 new girls during the next academic year.

Taking into account the 12- to 15-year duration of each girl’s education, increasing our commitment by five girls every year is tantamount to embarking upon a new adventure that will put another 60 to 75 young women in our care.

Everything is for the benefit of the women and girls of Rimkieta and its surrounding areas. Thanks so much to all of you who make it possible!