The Power to Decide What to Do with Your Children 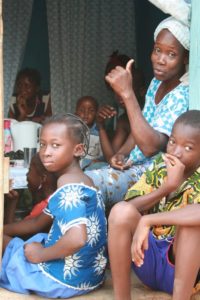 A woman waving from her house door with her children

I had planned a juicy first post of the year about the microcredit project that we have reinitiated, but the coup d’état got in the way, and who wouldn’t be reluctant to write about that? A month after that blow, here you have it. Anyone who thinks that a microcredit is “just” financial assistance should read on… because, far beyond that, a microcredit is a bargaining chip for the status of the Burkinabé woman.

The COVID-19 crisis forced us to put some projects on stand-by last year. Aware that the crisis is still a factor, but motivated by a better than expected end of 2021, we have just approved the 2022 PAP (Action Plan and Budget), which includes reopening the wonderful microcredit project.

The peculiarity of the microcredits that FAR gives is that they are adapted to the cruel reality of illiterate women, who lack not only a bank account, not to mention a permanent job, but also, frequently, even a basic DNI (national identity document), which is necessary to access the conventional microfinance system.

Thanks to a microcredit, a woman can engage in a small income-generating activity with which to alleviate the heavy family burden she bears. More importantly, it can change her social status, allowing her to decide for herself what to do with her life and that of her children, in case she is widowed. 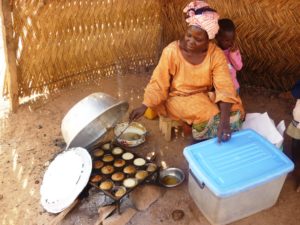 Beneficiary of microcredit elaboration and sale of “rosquillas”

There are still many countries in the world where women do not have the same rights as men, and Burkina is one of them.

There exists here something called the “social use” by which – when a woman is widowed – all the couple’s possessions (including as “possessions” her own person and her children) may become part of the husband’s family. Can you imagine such a thing? It can be even worse, because if the patriarch of the husband’s family cannot take charge of the entire family unit, he can divide it among different members of the family clan. However, if the woman has shown the clan and community that she is capable of generating income that will allow her to take care of the children, then she can decide what to do if widowed. In any case, a woman with a certain economic autonomy has a social consideration, tacit or explicit, that is different from that of women without any means of their own.

Some women even manage to generate one, two or more jobs in addition to their own! These women usually increase the amounts of a second and a third loan to several hundred euros to support the asset requirements of any expansion. 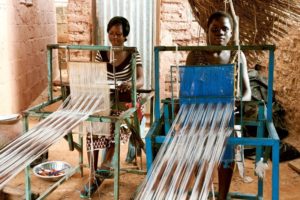 Faced with this reality, we have granted more than 1,100 microcredits, with a return rate of 99%, to women in situations of extreme poverty and exclusion, thus contributing to their professional development and to the equality of opportunity.

Microcredits, which average 115€, are returned throughout the year. FAR reinvests their “capital” in new microcredits. They are granted individually to women organized in groups of a minimum of 20 women, without collateral or guarantees external to the group itself. It has been shown that grouping women together for this type of financial aid facilitates training and follow-up as well as solidarity and cohesion among the beneficiaries. 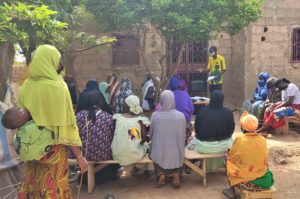 Rimkieta’s landscape is awash with enterprising women. Some dedicate themselves to the preparation and sale – outside the door of their homes – of food or beverages. Others put up a “stand” selling vegetables, fruit or condiments on the street or in the market. Others work pulling a cart for the itinerant sale of firewood or charcoal. Many others are weavers, stationed with their rudimentary (in the purest sense of the word) manual machines.

Starting the year with an action plan that includes more than 20,000€ to grant some 200 microcredits is a real blessing. A thousand heartfelt thanks on behalf of all the women beneficiaries to all of you who make it possible!