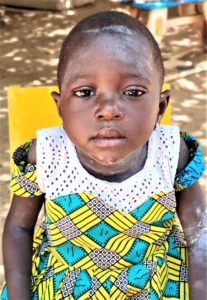 FAR has one more angel in Heaven. Dear Amdia, rest in peace and take care of us from up there.

“I am very sorry to have to share the news that last evening, Amdiatou was admitted to the emergency ward of the hospital, where she passed away during the night. Tests were positive for malaria, which, though still unconfirmed, is the likely cause of death. Although we did not wish for her to leave us so soon, she has passed without suffering and has been happy once again over these last few weeks. Rest in peace”.

With this sad message, Maria Bacardit informed us, a few days ago, of Amdiatou’s passing. She has gone to Heaven and left happy – happier than she had been in a long time. After three-and-a-half weeks of hope and a return to everyday life, on the heels of months of enormous suffering, Providence rewarded her with a quick and painless end.

Amdiatou, very lively, curious and with a huge appetite for learning, was 4 years old – one of the Maternelle’s new P3 girls this 2020-2021 academic year. After a few months at FAR, the teacher in charge of her class detected a problem with her vision in one eye. What was initially diagnosed as cataracts finally turned out to be a retinoblastoma, a malignant tumor in the tissues of the retina that occurs mainly in children under five, and which has a 95% chance of cure if detected and treated early. In Spain, no more than 30 cases are diagnosed each year. This tumor had spread to the brain, and it was too late to do anything about it. She had only a few months to live.

We turned, as we always do in these cases, to our beloved Doctor Idoia Rodríguez of the Barraquer Ophthalmological Center. You will remember that Idoia was here in Rimkieta in 2013 on the Barraquer Foundation initiative in which 1,000 people were visited and almost 200 eye diseases (most of them cataracts and pterygium) were diagnosed and treated by a local team. I reiterate my deepest thanks for everything to Drs. Idoia Rodríguez and Cris Fernández-Vigo, and to the optometrists Cris Vilá and Silvia Baró, who formed the expedition team, and of course, to Dr. Elena Barraquer, the soul and engine of the Foundation! 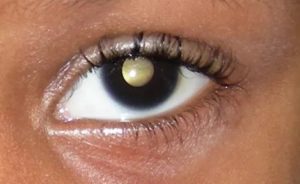 Stopping a retinoblastoma: (i) pupil appearing white/yellowish white rather than red under bright light; (ii) eyes that seem to look in different directions (cross-eye/strabismus); (iii) pain or redness of the eye.

Unfortunately, in Barraquer they confirmed the tumor and recommended we consult Dr. Jaume Català Mora, a pediatric ophthalmologist, expert in retinoblastomas, who, in turn, reconfirmed the diagnosis, and the prognosis. At that stage of the disease, nothing could be done for Amdiatou, other than to administer chemotherapy in tablets as palliative support. Thank God, that course was possible here in Burkina, and she had already begun.

The first months after the diagnosis, Amdiatou continued to come to the maternelle, with her characteristic vitality and desire to learn. At one point, though, the tumor began to protrude from the eye socket in plain sight. Because this was not only unpleasant for her, but also disturbing to others, Amdiatou’s parents kept her at home, to avoid the stigmatization that was sure to follow – for the benefit of the girl, as well as for the whole family – as such things in these parts of the world can have terrible consequences.

We established a schedule of home visits to Amdiatou: Two days a week, the monitors brought her learning cards, coloring books and educational games. At first, when the tumor showed only a little, Amdiatou was happy with the visits, she went out to the street to receive the teachers, who explained the learning cards and played with her. But, as the tumor grew from its socket, Amdiatou stopped going outside to receive them and began to wait for them in the courtyard of the house. Eventually, she no longer consented to see anyone, neither teachers nor even her parents or relatives hardly, secluding herself in a room of the house that she rarely left.

As soon as we saw the tumor protruding from her eye socket, we began to gather information about the possibility of removing it, in order to give Amdiatou the best possible quality of life in the remaining operation. It seemed that Amdiatou was destined to live out her few remaining months in sadness, shut up in a room with no zest for anything.

Then, as many times before, Providence put extraordinary people in our path, almost without our realizing it. Thanks to Dr. Català, whose human and professional interest in the case has been exceptional, and to María Bacardit, who managed the necessary permits in record time, Doctors Joan Prat and Hugo González, from Dr. Català’s team, via the Fundació Sant Joan de Deu in Barcelona, came to operate on Amdiatou.

Providence must love us very much, because it turns out that Doctors Prat and González are among a select number (just 15) of oculoplastic surgeons in the world – who specialize in this type of intervention. These two generous souls, without hesitation, left their daily family and professional duties behind for a week, to come to Ouaga. Not only did they operate on Amdiatou, they also trained the ophthalmological surgeons and students who observed the intervention at their clinic (as well as the FAR staff) in how to detect this type of tumor early.

Thank you very much from the bottom of our heart, dear doctors, for having restored to Amdiatou the “dignity” necessary for her to enjoy her last three-and-a-half-weeks of life, outside, happy, and playing with her friends! She passed on without the suffering we had anticipated.

There is no doubt that it was worth it!