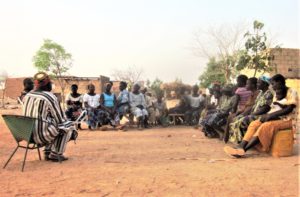 I have been waiting for some time for an event that might provide me the opportunity to comment on the “auctoritas” (the real, although not legal power) of Burkinabé society’s traditional leaders. Today, one of the women beneficiaries of the FAR vegetable garden was expelled from the neighborhood for adultery, opening the door to this new post.

The woman in question, a widowed mother of four, was caught “red-handed” with her brother-in-law, himself a married man and father of six. The case was brought before the territory’s “traditional chief/king” (Naba), who declared this type of behavior prohibited in his “lands,” and expelled both parties from the neighborhood. The woman has been taken in by her sister in another neighborhood some 25 kilometers from Rimkieta. The man has literally disappeared, leaving his wife alone, “dishonored,” and in charge of their six children…

Without delving into or judging the act in itself, this is a clear example of the moral and social power (an “auctoritas” based on lineage) –parallel to democratic power – which traditional leaders hold from their ancestors.  The “traditional leadership department” is a highly ascendant and powerful socio-political institution for Burkina’s more than sixty ethnic groups. Having survived colonization, today it continues to perform vital functions for social cohesion and peacekeeping, and is highly respected and accepted by the country’s other social institutions, including the governments.

His Majesty the Mogho Naba, Emperor King of the Mosi, in the center, together with His Excellency Cardinal Philippe Ouedraogo, Archbishop of Ouaga, the Hadj Sana A. Rasmané, representative of the Islamic Associations, and Pastor Henri YE, President of the Federation of Evangelical Churches and Missions. Union of tradition and religion for the maintenance of social cohesion.

A “Naba” reigns for life, succeeded by “his eldest son (the Nabikienga), who must be worthy” and must be at the disposal of his people in order to protect and defend the most vulnerable.

Among a Naba’s main responsibilities is conflict resolution, complementing and supplanting in many occasions the judicial and arbitration services of the State, in order to guarantee the perpetuation of traditional laws. In these laws of custom, for example, prison does not exist, as the community takes precedence over the individual, and does not accept one of its members being locked up and separated from the rest, whatever that person’s crime.

The “Naba” are the hinge between the State and the people, and are considered legitimate spokespersons for the local population, acting as a necessary link between tradition and modernity.

Furthermore, they are “guarantors” of cultural tradition and customs, of maintaining and promoting them so that they are not lost, despite the country’s socio-cultural changes.

The “Naba” also seek the maximum socio-economic development of their neighborhood, becoming developers or intermediaries of numerous State and NGO initiatives and projects.

The Mogho Naba, literally “chief” (naba) of the “world” (mogho), is the “King of the Mossi” of Ouagadougou – Burkina’s majority ethnic group – and represents the highest traditional authority.  He has his own Council of Ministers formed by 16 Naba, and has played a notorious role in the various crises that Burkina has experienced in recent years. The government assiduously calls upon the Mogho Naba for consultation in the face of social conflicts.

A delegation of traditional chiefs called by the President of the transition, Lt. Colonel Damiba, on March 25, to request his accompaniment during the transition. © DR for «Autre presse»

The traditional chiefs also play an important role in the extremely serious situation that the country is going through due to terrorism. They are currently key players in the negotiations that the new, post-January coup d’état government has launched to convince the young Burkinabé who have joined the terrorists to lay down their arms in exchange for reintegrating them into society.

These are young people from the most disadvantaged and remote areas, forgotten by successive governments. They are the frustrated and marginalized, “bought” by terrorists in exchange for logistical support, information or “silence.” As there are several ethnic groups – especially the Peul and the Fulani – who have been stigmatized by terrorism, and there are numerous allegations of abuse by the military during their arrests, and rumors of uninvestigated massacres, the most radical new “terrorists” – those who join the armed struggle – act out of “revenge.”

Nabas’ influence on electoral processes is also evident. While refraining from openly supporting any political party, the Naba are sought by the different candidates, especially by the most powerful, to act as “mobilizers” of the population in their favor, in exchange for benefits and privileges for “their lands.” 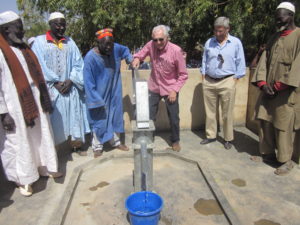 Inauguration of one of Jeanologia’s wells by our beloved Pepe Vidal, RIP, JC Vázquez-Dodero, the Zongo Naba and three of his counselors.

So it is that two of our local advisors are the Zongo Naba, traditional chief of Rimkieta (and Zongo, an adjoining neighborhood that was initially part of Rimkieta), and the Larlé Naba, one of the 16 Ministers of the Mogho Naba.

The Zongo Naba owns the land on which the FAR recovered the four wells dubbed “Jeanología” (after the FAR Institutional Patron Company), for the population, one of which supplies water to the orchard “Fundación Netri” (named for a FAR Sponsoring Company) that benefits 26 women. Furthermore, he has always guided us with the extraordinary knowledge and wisdom of an elder who has ruled for a long time.

The Larlé Naba is a man with public and political projection, and international relations. He is a man of substance, an entrepreneur and an innovator with diverse social initiatives focused on promoting the development of women.

The affectionate welcome FAR received from both Nabas from day one, their respectful support during our 18 years in Rimkieta, and their wise advice – revealing paths without obligating us to follow them – have been a great support for FAR’s foundation and progressive development in Rimkieta.

Larle Naba visit during one of FAR’s patrons stay

Thank you very much, “ses Majestés,” and long live our collaboration!