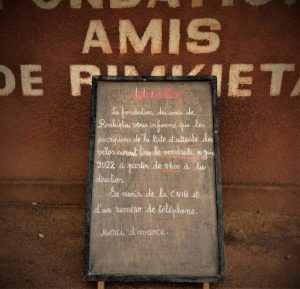 We are celebrating at FAR again because we have just provided bicycles to 5,000 people. Behind each of those 5,000 bikes is a person who has gone through our endless “waiting list,” which can receive more than 1,000 applicants in a single day.

A sign on the door of the Maternelle one afternoon announces the new opening for inscriptions on the waiting list for acquiring a bicycle.

The names of the first women on the list belong to those who have risen early to insure registration. They know that when we get to 1,000 we will close the list, and not reopen it for a year. Their effort that early morning is nothing compared to that of the women who we know have slept at the door to ask for a bike, a scholarship or a place in the Maternelle.

Let me make two clarifications with regard to this project. The bicycle is not, in Burkina, a piece of recreational-sporting equipment as in our countries, but rather the only possible means of transportation in most places in Burkina and in many other countries. Furthermore, a bike tends to make life easier for four or five people… 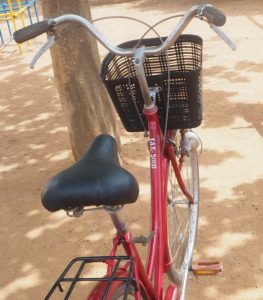 On mornings like this, to speed up the process as much as possible, everyone chips in together and the Maternelle teachers help applicants fill out the inscription questionnaires. We are all aware of the need and hope of these people to gain access to something that will change their lives.

As it is a priority to reach the neediest, we use questionnaires that contain the information we need to establish metrics to determine the level of social need for a bike:

These questionnaires, as I’m reviewing them, always serve as a dose of reality that reminds me why we’re here.

Sakina is 27 years old and a widowed mother of three children. She requests the bike so that her two older children (8 and 6 years old) can pedal to school instead of walking. They live “on credit” with a neighbor, sharing a house composed of two rooms – one room used as a small “living room” and the other as an even smaller bedroom. Three walls in the courtyard with a hole in the floor serve as a toilet and shower, and they cook outside. 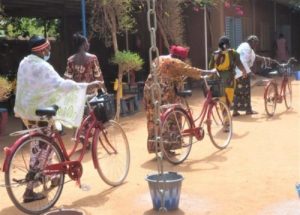 Three beneficiaries with their new bikes

Orokia is 69 years old, she is also a widow and takes care of her 12-year-old granddaughter who was abandoned by her mother and whose father, her son, has two other wives and 7 children in his care. The granddaughter will also use the bike to go to school. Orokia, still at her age, and in order to take care of the granddaughter, digs sand under a scorching sun to sell for a pittance to the manufacturers of adobe bricks.

Antoinette is 29 years old and is the second wife of a 58-year-old man. Mother of 3 children of her own, she also takes care of the 2 children of her “co-wife” (her husband’s first wife), who is sick. Antoinette sells coal at the door of her house, and requests the bike to be able to move around Rimkieta to sell the coal and, thus, increase sales.

These are just three examples of questionnaires approved to be a beneficiary of a bicycle; whose stories illustrate the enormous social impact of the project. The fact that we have provided more than 5,000 bicycles, and that we continue to have women getting up early to insure their registration on the waiting list, is another clear indicator of the real need for the project in Rimkieta.

This project would not be possible without the help of our Patron Company Wavip Group, our Sponsoring Companies Foundations Netri and Roviralta, and the Telva Solidarity Award of 2019, as well as the many wonderful private “godfathers” who, for years, have been pushing the project forward with their help.

On behalf of all the women beneficiaries, many thanks to all of them, and let’s keep going!