Women: Units of Exchange in Burkina

Women: Units of Exchange in Burkina 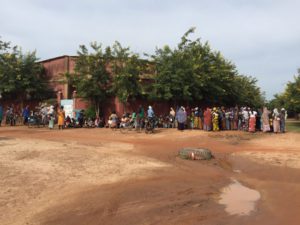 Happy mothers, waiting their turn to pick up the scholarships

We are in the middle of the busy period of granting school and university scholarships for the new academic year. You can imagine the feeling in the air: there is a lot of commotion, meticulously organized, but a lot of commotion nonetheless. There are happy and satisfied faces all-around: on the mothers, on the boys and girls receiving the scholarships, and, of course, on us, who have the privilege to bestow them. But the reason why one mother was four days late to pick up the scholarship for her daughter has triggered an anxiety that I’m having trouble overcoming.

Organizing the granting of more than 500 school and university scholarships isn’t easy, but we’ve gotten the knack. Rigorous planning, distributing days and time slots for the mothers, which we have been doing for the 10 years we’ve been running the project, have allowed us to carry out the distribution without much going awry, despite how hard it is to organize anything here. 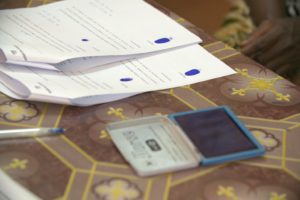 Signature on the commitment contract to use the school supplies adequately, present the trimester grades, and to contribute a 10% of the scholarship, an annual fee that usually doesn’t surpass 1€.

There’s always a mother who arrives late to her allotted time; and always without notice: because she was in labor the day she were scheduled, or because a she or a family member is sick, or because she has lost the paper that we give each women where we write down the date and time of the meeting and she’s forgotten when she was summoned.

We are usually understanding, albeit strict, with all of them, because unforeseen circumstances are our day-to-day. However, if you are convened to receive a scholarship for your child and you can’t come and get it, inform us, at least inform us… We have heard every possible excuse for not doing so, but that will be the subject of another post. I’ll get to it any day now!

Amongst tears and sobs, she told us that more than a week ago she was at home with her two co-wives (her husband’s other two wives). She was washing the children’s clothes – they have seven between the three of them, and two of them can still bear children – while the other two were cooking dinner. The police arrived with an arrest warrant for their husband for an alleged motorcycle robbery. The husband wasn’t home. They tried to call him, but his cell phone was off. The police decided to take her under arrest instead (the youngest of the three), as ransom, leaving the other two with the errand of informing their husband to go to the police station, where they would release his wife and arrest him. 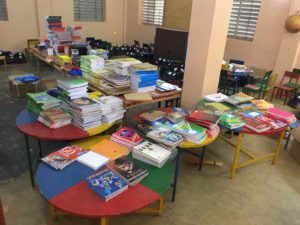 Everything is ready for handing out the school supplies

The woman, whether from ignorance or faith that her husband would present himself, did not resist arrest and was locked in the county jail. But it wasn’t to be… ten days passed and the husband didn’t appear, so the police wound up setting her free without having caught wind of the man. I couldn’t believe it and I had to tell Silvie – in charge of the scholarships and other projects – to repeat the story several times so I could assimilate it.

I don’t want to make the story even more dramatic: it’s not necessary. Nonetheless, I’m going to describe what a county jail is here, just in case you have the wrong idea of what it means, as I had until I saw one here, thanks to crime movies. The cell of a police station here is a space with four walls with a tinplate ceiling, a miniscule window from which almost no air flows, no furniture, not even for sitting down, much less for sleeping. They were conceived of as spaces for “passing through” for less than 72 hours, where the detainees wait to be sent to prison or to be set free. But the reality is another, and the detainees pile up, living days and weeks in subhuman conditions…

However, if you are unlucky enough to have been incarcerated during a strike by the public prison workers who are in charge of transferring the detainees from the county jail to prison, (it has just come to an end after more than four months, generating massive over-crowding), you can imagine the landscape, the worse than usual hygiene standards… The detainees aren’t fed, so family members have to bring them something or, if luck is on their side, a cellmate might share his rations… 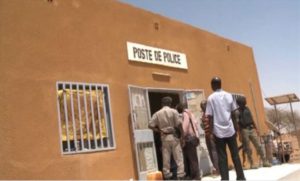 That’s how this “token” woman has spent ten days in a society that, once again, has shown us how much it still needs to evolve regarding fundamental women’s rights.

Injustices are committed everywhere, every day. Nevertheless, here it occurs on a whole new level. We can’t do much in these cases, or, perhaps, we’ve already done a lot, I don’t know. We could only give her daughter’s scholarship, cheer her up, and advise her to report the case to a lawyer. Let’s hope that even more than the courage to denounce her case, she has her family’s support and that of the men in her household, because without it, she won’t do it. Even if it’s only in that county jail, let’s hope it doesn’t happen again!

P.S. The husband turned himself in two days after they freed her and he’s in prison awaiting trial.